Turn this call to action on or off. Link this call-to-action to a page or your choice.Click here
Share Tweet Pin G Plus Email
Note: As this article is going to press, two important developments in the appeal of Amanda Knox’s wrongful conviction in Perugia, Italy, have just taken place. A group of Italian legislators led by Rocco Girlanda has filed a petition with the President of Italy and the Italian justice ministry requesting an investigation of the conduct of the Perugian prosecutor, Giuliano Mignini and others in Amanda’s trial. This important request for an investigation was read out loud before the Italian parliament.
The second development involves a letter to the President of the United States and copied to all members of congress that also requests an investigation, this time of the failure of the U.S. consular officials to fulfill their obligations to safeguard the rights of Amanda Knox under Italian law. We are co-signers of that letter, along with Michael Heavey and Thomas Wright. Details regarding these letters are being released through other outlets. The following article is intended to provide additional information in a less formal format.
Americans traveling abroad are subject to the laws of the nations they visit. The rights that, at least in theory, U.S. citizens enjoy here at home do not apply. This poses problems of understanding due to language barriers and legal differences even when the visited country has a sophisticated criminal justice system. Matters can be far more difficult in places like Iran or North Korea, where politics, religious zealotry, and corruption far outweigh any balance beam of justice. Yet, at least in those extreme cases you know where you stand – on quicksand, but with the hope that the State Department will apply pressure on the local dictator to secure your eventual release if you are wrongly imprisoned.
As we’ve watched the unbelievable investigation, bizarre prosecution, and wrongful conviction of Amanda Knox in Perugia, Italy, we have seen a situation that is more complex and nuanced, resulting in a kind of legal limbo. The problem is that while Italy is an advanced western nation, a critical ally on many global issues, it is saddled with a justice system that looks good on paper but that is, at least in Perugia, a work in progress.
The presumption of innocence, for example, is enshrined in the Italian constitution. Knowledgeable observers say, however, “they don’t get it,” relegating this fundamental principle to an abstract irrelevance. The idea that guilt is something that must be proven beyond a reasonable doubt, rather than conjectured as a possibility, is another newfangled thing that does not seem to have taken hold.
Then there is the corruption and the lurid media environment.
From The Economist, June 10, 2010:

“…Italy is not like other countries. It is notoriously corrupt, so politics and justice overlap.”
“Something else to which Italians are largely oblivious is the routine trampling on the rights of suspects and others caught up in investigations. Information is selectively leaked to reporters before the accused come to trial, often creating a presumption of guilt that is difficult to reverse, whether in court or in the public mind. An example is the case of Amanda Knox, an American student, and her Italian boyfriend, Raffaele Sollecito, who were convicted last year of the murder of Ms. Knox’s British flatmate.”

One of us (Mark) wrote about this in his recent book about the trial, The Monster of Perugia – The Framing of Amanda Knox (www.monsterofperugia.com). The following is an excerpt from Chapter 12, “Gulliver’s Travel Warning.”

“Legendary traveler Lemuel Gulliver had the misfortune to be caught in a violent storm at sea. Driven far off his course, his ship sunk, his shipmates dead and his lifeboat gone, Gulliver swam and waded till he happened upon an unknown island. Safely removed from the terrible weather, Jonathan Swift’s famous character awoke to find that he was captive and at the mercy of a perfect storm of political intrigue among a very little people, the 6” tall, Lilliputians. 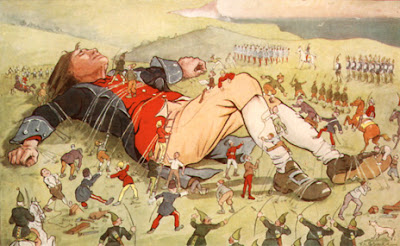 Amanda Knox had the misfortune of having her roommate murdered while she was living abroad. The tragedy that befell Meredith could just as easily have happened to Amanda – a thought that weighed heavily upon her in the days after the murder. Having escaped that terrible fate, Amanda found herself held captive and at the mercy of a perfect storm of third world justice, corruption, and personal interests, all deeply entrenched in what is theoretically a first-world nation.
The language and culture barriers between Gulliver and the Lilliputians were immense. There had been no known contacts between their worlds, after all. He tried speaking half a dozen languages to them and got nowhere. There was an unfathomable gulf to cross, and yet…. Gulliver found ways to express his respect for his captors, who recognized and appreciated his mild disposition. Soon they were won over. They fed him, freed him, they got along with him, right up until he refused to slaughter their enemies from the neighboring island of Blefescu.
Amanda expressed her respect for her captors and her confidence in the Italian justice system. She has been a model prisoner. She was paraded through the streets when arrested, she had her picture displayed beside convicted mafia dons before she was charged, she was held in prison for a year before those charges were brought, she has been demonized in much of the Italian press, and she was wrongly convicted and sentenced to 26 years in prison. Score one for the Lilliputians.” 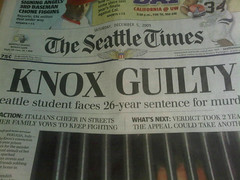 Amanda doesn’t seem to be blessed with Gulliver’s luck, so we thought we would check on the job the diplomats have done ensuring her right to fair treatment under Italian law by reviewing the cables that reported on the case by the United States Consul in Florence. The cables were conveniently revealed by the Wikileaks organization. We wondered how the information reported in those crucial cables compared with what had actually happened to Amanda.

In theory, Amanda has the full support of the United States’ Department of State, which has the responsibility to ensure that American Citizens’ rights under local law are respected. At least, that is what they say. In response to questions about what they were doing about Amanda’s ordeal in Perugia, State Department Spokesman Ian Kelly said, “…it is the responsibility of our consular officials to make sure that American citizens are treated fairly under local law.” That seems clear enough.
With all of that in mind, the following is the first cable sent, in December of 2008, more than a year after Amanda was arrested after an all night interrogation by a dozen polizia detectives operating in rotation, speaking in Italian, and without being allowed an attorney. That interrogation, it was claimed, was not recorded, in another violation of Italian law.

That was the first cable sent after Amanda was paraded through the streets of Perugia in polizia vehicles with sirens blasting in a macabre kind of victory dance immediately after her arrest. It was after it was ruled that she could be held for a year in prison before being charged. It was after Amanda was relentlessly demonized by a rabid press, fed a continuous stream of news leaks, lies, and innuendoes from the prosecution and polizia, much of them illegal, all of them consumed by a jury that was not sequestered or enjoined against discussions in any way.
This cable, like all the rest, is a simple list of the starkest, and ultimately least informative facts about the arrest and prosecution of Amanda Knox. It is as if a lynch mob dragged someone away in full view of everyone, and all that was reported back was “Suspect was apprehended.” No mention of the white hoods, torches, or the terrified, innocent victim. Amanda Knox was in the process of the most conspicuous public lynching in decades, and yet the report gives no hint whatever that it was anything but justice taking its course.
But let’s look at more cables to be sure. Perhaps they were waiting for the actual trial to report back anything of substance. A month or so after the trial began the next cable was sent:

12. TRIAL/HEARING DATE:  Trial is ongoing. Hearings take place every Friday and Saturday. The court plans to follow the same weekly hearing schedule in the foreseeable future.

12. TRIAL/HEARING DATE: Trial is ongoing.    Hearings take place every Friday and Saturday.   According to Ms. Knox’s attorney, the trial is being moved to an accelerated time-table and beginning June 4, hearings will be held three times a week, on Thursday, Friday, and Saturday.

Note the numbers, mostly 12 or 18, denoting categories of information. There is no 1, 2, 3… in most of these particular cables, but only 10, 12, or 18. Apparently, 10 means “Where At,” 12 means, “Cursory description of the trial schedule,” and “18” means something like, “We had to skip a nice luncheon to go to some damned prison.”
It is a shame that only these few numbers were used. Diplomatic cables that briefly summarize the relentless destruction of an innocent life might benefit from using more categories. May I make a humble suggestion? How about assigning, say, 23 to “Defendant’s rights are being trampled beyond recognition,” and how about 42 for, “Prosecutor has been convicted of prosecutorial misconduct, but is still the prosecutor.” That would leave 36 to represent “Defendant has been relentlessly smeared by the world’s press,” and 78 for “The forensics were a travesty of pseudoscience.”
Three more cables follow, at roughly three-month intervals, in August, November, and December of 2009. They say nothing about the constant spread of misinformation by the prosecution, nothing about the fact that the prosecutor was under indictment for misconduct (convicted of same in January, 2010), nothing about the fact that the DNA evidence would never be admitted as evidence in any normal courtroom, and that the two star prosecution witnesses were drug addicts.
One might argue, “So what?” Perhaps these reports are simple schedule documents, but here’s the thing. When asked about the trial after Amanda’s conviction in a December 7, 2009 briefing, State Department spokesman Ian Kelly said “we haven’t received any indications necessarily that Italian law was not followed.”
I guess they weren’t paying attention. Adding insult to that injury, in response to a question that pointed out the tainted evidence, the non-sequestered jury, the problem prosecutor, Mr. Kelly asserted that “…Italy is a democratic country that has an established and transparent legal system.”
Which brings us back, full circle, to our opening point. If Amanda had been captured by a crazy prosecutor in North Korea, she might have had some support from State. In Italy, she has been on her own.
Here’s the takeaway lesson from all this. The next time you’re in a foreign country and a crazy, corrupt local prosecutor decides to make a career move by throwing you in prison for the rest of your life, you can count on your United States’ consul to dependably tick off the milestones as you rot in jail.
Filed under: Journalism, News
Share Tweet Pin G Plus Email
previous article: New York State’s Water Bottle Insurgency
next article: The Benefits and Components of Physical Fitness