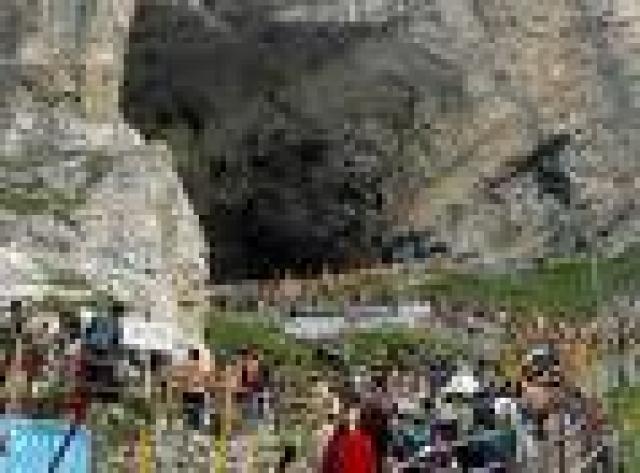 Pahalgam (J&K),June 25- This year’s Shri Amarnathji Yatra from the traditional route of Pahalgam will commence with effect from 26 June 2009. The Yatra is already progressing from the Baltal route since 16th June.

Announcing this here this morning, B. B. Vyas, Chief Executive Officer of the Shri Amarnathji Shrine Board (SASB) said that a decision to this effect was taken by the Chairman SASB Mr N. N. Vohra, after examining the report of the Joint Team comprising senior officers of the State Administration and the Chief Executive Officer of the Board, which undertook several visits to the track in the past two days. The Chairman of the Shrine Board also took note of the reports on the status of the track submitted to him by the Pahalgam Development Authority, Deputy Commissioner Anantnag and the Jawahar Mountaineering Institute.

The Chief Executive Officer elaborated that the State Administration has assured the Board that all logistical and other support shall be made available for the smooth conduct of the Yatra. The Board had informed the State Government to direct the Pahalgam Development Authority (PDA) to immediately deploy additional labour on the critical patches of the track between Sheshnag-Poshpathri to improve the track to an operational level. The Board has further requested that the PDA team should continue its efforts to keep on improving and maintaining the track even as the Yatra proceeds on its course.

Giving details of the logistical support being provided by the Government, the C.E.O. said that the  and KashmirPolice is responsible for establishing effective access control to check and regulate the flow of Yatris on day to day basis. Such Access Control Points (ACPs) shall be established by the Police at the Nunwan Base Camp, Chandanwari and at any other location as may be deemed appropriate, on the traditional route. He said that the fundamental responsibilities of the ACPs will be to check the number of pilgrims on the traditional route and regulate their movement towards the Holy Cave, with halts at Sheshnag (the first night) and Panchtarni, as per the past practice. The pilgrims shall be required to depart from the various Camp locations as per the timings decided by the , taking into consideration the track and weather conditions. The ACPs shall ensure that, initially, for the first week, not more than 2000 registered pilgrims per day would be permitted to proceed on the Yatra on “first come first serve” basis. The number of pilgrims to be allowed to move per day shall, however, be reviewed after the track stabilizes further in the coming days.

The Chief Executive Officer clarified that no old or infirm person and children below the age of 12 years will be permitted to undertake the Yatra on the Sheshnag route in view of the recent weather conditions and the fact that the track is through a difficult snow route. The lady pilgrims have been advised to avoid undertaking the Yatra on this route, till the Board issues a further clearance report, in the next about 10 days.

Referring to the advisories issued to the pilgrims from time to time, the Chief Executive Officer once again stressed the need for carrying proper warm clothing (head-gear, shoes, rain coat, heavy woolen jacket etc.) and said that these shall be mandatory and that no Yatri shall be permitted to go beyond Chandanwari without proper warm clothing. He said that pilgrims shall be required to stay the first night at Sheshnag (after the commencement of the Yatra on the traditional route) and shall be permitted to proceed further from Sheshnag only in the specified hours on the following day. Therefore, pilgrims would need to build necessary flexibility in their travel plans, he added.

The Chief Executive Officer further stated that the Registration Slips will be checked at Nunwan and Chandanwari and no pilgrim, either unregistered or registered for the Baltal route, will be permitted to undertake the journey on this route. Moreover, pilgrims registered for the traditional route from June 7, 2009 onwards shall be permitted to undertake the journey only after they have got their earlier registration either re-validated or changed to a new date by way of fresh registration from the designated branches of the J&K Bank.

The C.E.O. of the Board emphasized that the various regulatory processes are aimed at ensuring complete safety and security of the pilgrims, particularly in view of the obtaining weather conditions. He expressed the hope that the pilgrims will appreciate the factors which are beyond human control and abide strictly by the Board’s advisories to make the ongoing Yatra a satisfying experience for all concerned.