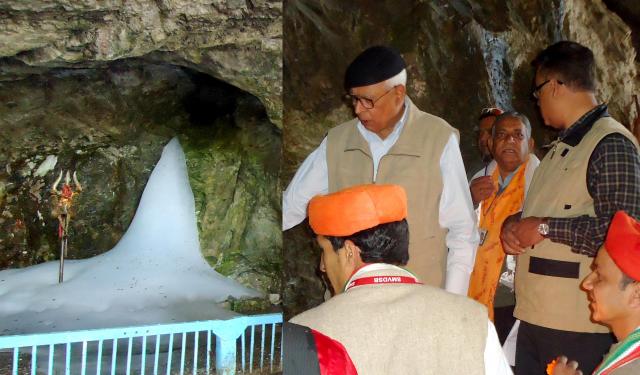 Srinagar,August 02 (Scoop News) -The annual pilgrimage to the Holy Cave Shrine of Shri Amarnathji concluded today on Shravan Purnima amid chanting of religious hymns in the spiritual ambience of South Kashmir Himalayas.

N. N. Vohra, Governor, who is Chairman of the Shri Amarnathji Shrine Board, and Navin K. Choudhary, Chief Executive Officer, participated in the special Pooja at the Cave Shrine. The Governor prayed for sustained peace, harmony, progress and prosperity in the State.

Shravan Purnima, which coincides with the Raksha Bandhan, witnessed serene religious fervour with the arrival of the Holy Mace of Lord Shiva at the Holy Cave, situated at a height of 3,880 metres, after a night halt at Panjtarni, the third and final halting station enroute the Shrine. Mahant Deependra Giri, accompanied by a large number of Sadhus, carried the Holy Mace, popularly known as "Charri Mubarak", and offered Pooja at the Shrine.

The Governor, expressing satisfaction over the smooth conduct of this year’s Yatra, despite serious constraints arising from the heavy snowfalls in the preceding winter and bad weather for several weeks before the commencement of the Yatra, thanked the State Government, Army, CRPF, BSF, State Police, BSNL, J&K Bank, Department of Posts and all other concerned organizations, and the people of the State, for their strong support in the management of the Yatra. He lauded the close coordination which had been maintained between the Security Forces, the Civil and Police Administration, all the stakeholders, local population and the Shrine Board in ensuring a smooth and peaceful Yatra.

It is pertinent to mention that in the period before the commencement of the Yatra, on 25th June and, thereafter, throughout the duration of the pilgrimage, the Governor has been undertaking regular visits to the Yatra area, including aerial reconnaissance of the Yatra routes and visiting all the Camps on several occasions. He has been daily monitoring all important aspects of the Yatra management in the past 39 days.

The Governor has directed the CEO to ensure complete cleaning up of all Camp sites; preparing a Camp and route-wise Action Plan for Yatra 2013, keeping in view the experiences gained this year. He stressed that route-wise arrangements of all aspects of the Yatra must be worked out well in advance with particular focus on medicare, sanitation, cleanliness, water and power supply and other facilities and, side by side, ensuring protection of environment and ecology of the Yatra area.

The Governor expressed serious concern and grief over the loss of life of 88 pilgrims due to medical reasons, during this year’s Yatra. He expressed deep regret that besides the 88 who died on account of medical reasons as many as 42 had died due to accidents, 7 within the Yatra area and 35 elsewhere in the State.

The Governor asked the CEO to immediately launch a massive post-Yatra sanitation drive, involving the Pahalgam and Sonamarg Development Authorities, so that the entire Yatra area is cleaned up in the next few days.

The CEO stated that over 6.20 lakh Yatris paid their obeisance at the Holy Cave Shrine during this year’s pilgrimage, which had commenced on 25th June, simultaneously from the Baltal and Pahalgam routes.