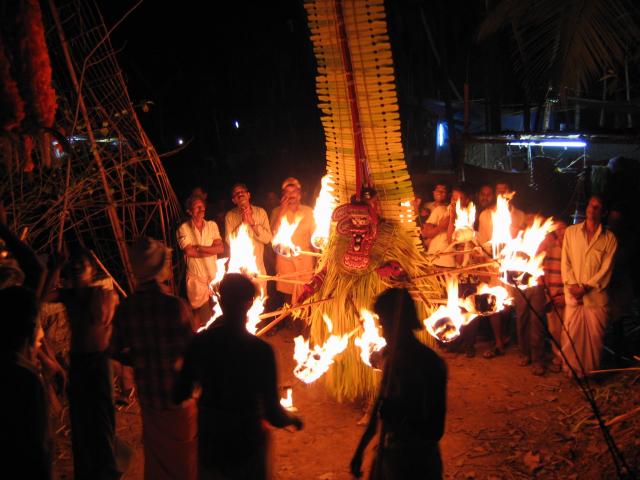 Theyyam is a centuries old ritual that takes place only in small villages in the northern part of the Kerala, i.e. Kasargod, Kannur, Waynad and Calicut which were form part of Malabar districts of former Madras Presidency. Theyyam is one of the most outstanding ancient dance forms of Kerala. It is a very fascinating ritual practiced for centuries by certain lower caste people of northern Kerala. This folk art form is also called as Thirayattom which is performed in Kavus or village temples. The theyyam or kolam (a form or shape) represent mythological divine or heroic characters. There are nearly 400 theyyams in northern Kerala. Theyyam is performed by male members of particular castes only. Theyyam performers are from exclusively ex-untouchables castes like Malayan, Pulayan, Vannan, Anjootan, Munnutton, Velan, Chungathan, Koppalan, and Maylion. During the performance, however a low caste performer becomes God and hence could interact with and have power over the high-ranking priests and leaders of the village. In this way theyyam represent a complete reversal of the social caste structure. Theyyam dance has its roots in ancient tribal culture of Kerala dating back to the Dravidian age. It lays great importance to worship heroes and ancestral sprits. Theyyam is a wonderful amalgamation of dance, mime and music. Chenda, Veekku, Elathalam, and Kurumkuzhal (Bugle) are the musical instruments used in theyyam. Season of theyyam continues for six months beginning from the Malayalam month of Thulam (October-November) and continues till Edavam (May-June). Most of the theyyams are held in between Korapuzha of Calicut district and Chandragiripuzha of Kasargod district of northern Kerala. Still now theyyam is a popular performing art. It is rich in culture and is essentially a dance festival. It has its roots in the area of north Kerala and even in Karnataka. There are numbers of studies conducted in relation to theyyam. But there are no such attempts were made to study theyyam in the perspective of tourism. So it has got great importance to view how theyyam closely interconnected with tourism. If we correlate theyyam with tourism it is will be an acclaimed initiation for the development of tourism in north Kerala. CLIK HERETO READ MORE