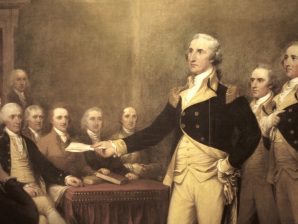 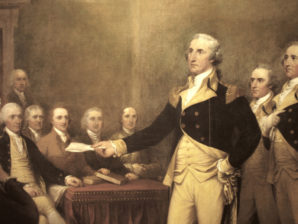 This is a question that crops up from time to time when we as Americans think back to the founding fathers and the sacrifices they made in order for this country to become independent of Great Britain. Many of them gave their lives and their property in the struggle, and some gave their health. For George Washington, the Commander-in-Chief of the Continental Army, some of his personal sacrifice included his teeth.

According to scholars at Mount Vernon, Washington’s estate and library, one belief about our first president is patently false: George Washington did not have wooden teeth. He did have a host of other dental woes that long predated the American Revolution, however. From his youth, Washington suffered tooth pain. Historians have numerous records for the purchase of teeth brushes, payments to dentists, and letters and diary entries detailing the pain he lived with because of his rotting teeth.

In fact, one letter from Washington to his dentist was intercepted by the British and the information and because they took his tooth woes for granted as truth they made assumptions about where the Continental Army was and where they wouldn’t be: at Yorktown, closing in on General Cornwallis. This erroneous assumption on their part meant that Cornwallis did not receive reinforcements and the Continental Army was able to defeat him at Yorktown in October of 1781 and win the war.

The rough conditions Washington endured in the long struggle between July 4, 1776 and October 19, 1781 meant more lost teeth despite his using the services of a French dentist, Dr. Jean-Pierre Le Mayeur. By the time he was inaugurated as the first President of the United States he was down to only one natural tooth. He wore expensive but ill-fitting dentures in order to eat and retain a normal appearance.

Washington may seem like an extreme case, but he wasn’t. Before the advent of modern dentistry, losing most or all of one’s teeth was a regular occurrence for people as they aged.  Dr. James Vincelj of Dental Associates of West Michigan notes that people take for granted the many choices they have about their oral health today. “It used to be much worse,” he says. “Back in the days of settlers, dentistry could be practiced by anyone with a turnkey and some whiskey as a painkiller. The pain must have been terrible for people to pay an itinerant stranger to yank a tooth out. But they did it. Of course, in many places in the world today, people still lose many teeth early on in life.”

While celebrating Independence Day, it would be appropriate to remember many of the other difficulties we modern Americans do not have to suffer and appreciate the sacrifices our ancestors made so we can all enjoy a better life than they did.