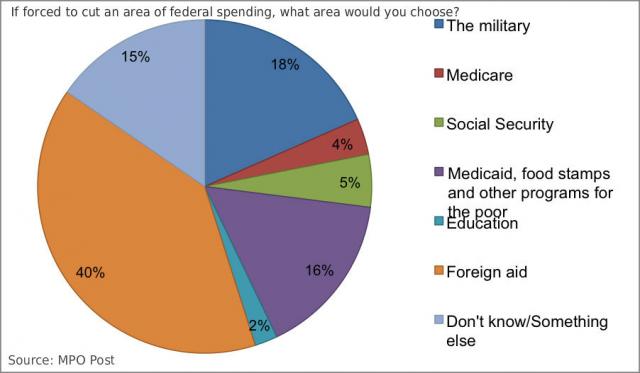 Washington, D.C. – A series of polls from the Media and Public Opinion Research Group finds that American views on foreign aid are conflicting and possibly confused.
Americans seem to support foreign aid in practice, when it comes attached to a mission. In March, the Media and Public Opinion Research Group asked Americans what they think the US government should do about the conflict in Syria. The answers were varied, though one solution earned over one third of the respondents’ support: extending humanitarian aid to Syrian civilians.
34.5% of respondents said that humanitarian aid should be the entirety of American involvement in Syria, though more responded that they would like to include humanitarian aid in bundles with other actions: 19.8% said they would support humanitarian aid plus non-lethal aid; 10.8% said they would support humanitarian aid, non-lethal aid and arming the opposition; 5.3% would add air strikes and missiles; 2.9% would add armed forces. 21.8% did not think the US should provide humanitarian aid, or be involved with Syria at all. 5% didn’t know or said something else.
The large amount of support for sending humanitarian aid to Syrian civilians is contrasted with a finding from an April poll in which respondents were asked to choose an area of government spending they would most like to see cut. When forced to choose an area, 39.5% of respondents selected foreign aid, making it the single most popular choice. The second most popular choice, the military, trailed behind with only 18.4% of respondents choosing it.
It would seem that when considered as a cost, rather than a defined project, foreign aid is less popular. What can this discrepancy be attributed to? It’s possible that it’s a simple misunderstanding: most Americans think that the government spends much more on foreign aid than it really does.
When MPO asked respondents to estimate what percentage of the budget goes to foreign aid, one third of respondents guessed it to be over 20% of the budget. Another third thought foreign aid spending took up between 2% and 20% of the budget, while only a third of the public got it right, saying that foreign aid spending takes up less than 2% of the budget—the truth is that foreign aid is about 1% of the federal budget. Perhaps most people simply think that there is enough money flowing into foreign aid to cut the budget without cutting the programs.
Data about Syria was collected over the month of March 2013, from 511 respondents with an estimated margin of error of 4.34%. Data about the budget was collected over the month of April 2013, from a poll of 516 respondents.  The margin of error is 4.31%. Data about the amount of budget taken up by foreign aid was collected from a March 2013 survey of 740 respondents.  The margin of error is 3.6%.
Filed under: Politics, US
Share Tweet Pin G Plus Email
previous article: Omar directs NC Ministers to attend public issues
next article: Explaining Death