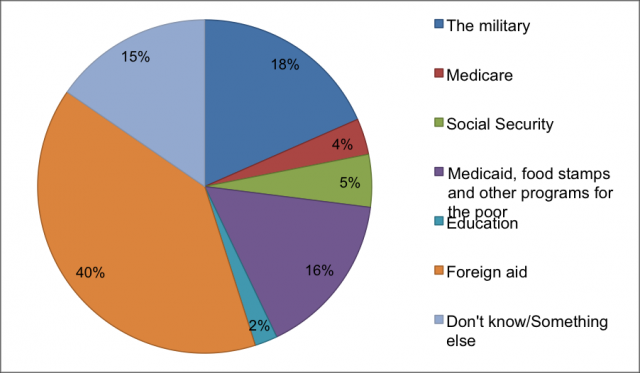 Most Americans agree that cuts to certain government spending programs should be used to address the federal budget deficit, but which programs would we pick?  A recent poll from the Media and Public Opinion Research Group (MPO) found that when asked to choose an area of spending for the government to cut, foreign aid was the most popular choice, selected by 39.5% of the American public.  The military came in a distant second (18.4%), followed by spending for the poor (15.9%).

Social security, Medicare and education were the luckiest programs, each chosen by only a small percentage as worthy of being cut (5.1%, 3.5% and 2.2% respectively).  15% of the public wasn’t sure or would choose something else.

Obama supporters and detractors found little common ground on this question.  Respondents who approve of the president’s job performance are over four times more likely to suggest the military as the best place to cut spending (28% compared to 6.3%), and almost three times less likely to suggest cutting programs for the poor (8.4% compared to 24.4%).

Cuts to foreign aid are much more popular among those disapproving of the president (54.1% compared to 28.2%).

While cutting foreign aid is the option that would appear to please the most people, it would be one of the less effectual areas to cut from the budget—less than 1% of the US federal budget goes towards foreign aid.  Likely, many of the people who would like to see this area cut are unaware of how comparatively little is spent on it.  A survey from MPO last month found that less than one third of the American public knows that foreign aid takes up less than 2% of the budget, while a third believe that foreign aid spending takes up more than 20% of our national spending.