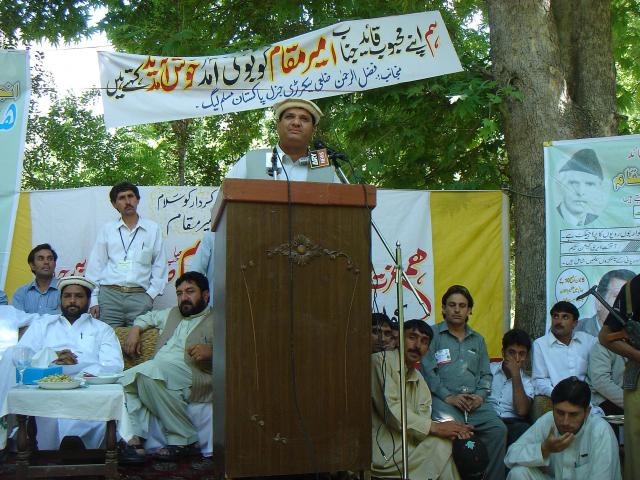 Work on Lawari tunnel and Athak Irrigation channel will be reassumed.

CHITRAL: Federal Minister and Provincial president of Khyber Pahtonkhwa Pakistan Muslim League Quaide Azam group Engineer Amir Muqam assured that people that work on Lawari tunnel and Athak irrigation channel will be start very soon. He said that democracy can never be strengthen until solving basic problems of public. He said that politicians should to focus on public issues instead of criticism for criticism. And they should to think about possible solutions of these problems jointly at assembly. He was addressing a public gathering at Booni some 75 KM from here. Member provincial assembly Haji Ghulam Muhammad, MPA Shangla Muhammad Rashad Khan, former MPA Said Ahmad Khan, Faizur Rehman, Hakim Ali Advocate and other party workers of PML Q also spoke on the occasion. Engineer Amir Muqam visiting Chitral for two days political tour. He was warmly welcomed by masses when he enter in premises of Sub Division Mastuj. Small girls shower roses and flowers upon him. Besides it some local paraglide welcome him carrying flags of PML Q. Addressing to a huge public meeting  Amir Muqam said that we trust on principles and never treat politics on personality. He said that I fulfill all of my promises with public. He said that he must convince federal government and high ups of NHA for Chitral, Booni, Shundur Gilgit road to be complete it earlier.
He also assured the masses that he will try to motivate federal government to start work on Lawari tunnel and Athak irrigation channel. He said that Lawari tunnel is a gift for the people of Chitral which will be completed with a cost of 7 billion but he criticized that in present Budget only 1 billion have been earmarked for this mega project. He was also presented traditional gifts of Chitral cloak and Chitrali cap. Addressing to the gathering MPA Shangla Rashad Khan declared that I will never demand for my own constituency but will try of my best to benefit Chitral because of a very beautiful and peace loving people. MPA KP Ghulam Muhammad demanded for separate district of Mastuj as it was already existing before merging of Chitral state in 1969 with Pakistan. He said that 170 million loans were remitted in previous government. Amir Muqam highly appreciated people of Chitral for maintaining exemplary peace and said that I solute to your commitment and declare that he will donate last tip of his blood for Chitral people. He criticized statement of Interior Minister Rahman Malik saying that he has no time for good governance. A large number of people attended this public meeting.
Jishni Bahara (spring Festival) Lovely star cricket tournament concluded.
CHITRAL:  Jashni Baharan Lovely Star cricket Tournament concluded at Koghuzi play ground. Some 50 cricket teams participated in the tournament. Chitral Mordeh Eleven and Singor Cricket Club team success to qualify for final match. First bating by Singor Cricket club with a target of 112 runs Mordeh team success to score the target in 12 over and won the match. During the final match Chitral Mordeh team defeated Singor team and declare winner team.  Chasing the total Muldeh won the match after 12 over and won declared winner team by 9 wickets. Federal Minister and Provincial Minister KP of Pakistan Muslim League Q Engineer Amir Muqam was chief guest during the final match. He announced 40000 for organizing committee, 15000 for winner team and 10000 for runner up team. The chief guest also distributed Trophy and Cups among the players. A large number of spectators were present in the ground. The local demanded for maintenance and construction of a stadium at Koghuzi because the present one is in a very dilapidated condition.
G.H. Farooqi PO Box NO.50 GPO Chitral Pakistan or Bank Islami Main Branch Chitral.
Telephone No. 03025989602, 03337069572, 03469002167, 03159698446, 0943-302295, 0943-316052, 0943-414418
Email: gulhamad@gmail.com
Filed under: Politics, World
Share Tweet Pin G Plus Email
previous article: Philippines: DepED says make a kid and toys happy – donate old toys and sports gear to schools
next article: Spring Festival Tournament ended