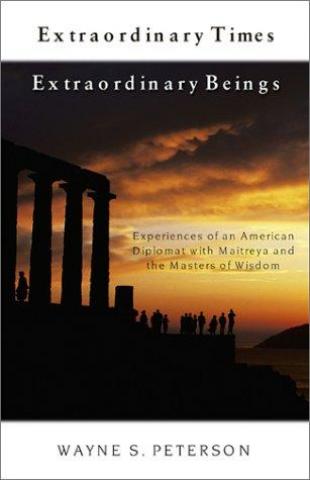 Wayne Peterson’s book Extraordinary Times, Extraordinary Beings (Hampton Roads) covers an enormous amount of terrain beginning with what he terms "a miraculous encounter with The Blessed Mother" during his childhood, and then follows a trajectory to his eventual career as an American diplomat and the director of the Fullbright Scholarship program.

While completing his university studies in 1964 in Madison, Wisconsin a chance meeting unfolded with David Rockefeller who happened to be on campus recruiting for The Peace Corps.  Peterson writes: “Within weeks I was in a Peace Corps training program for volunteers assigned to Brazil.”

After that experience, his career appeared to develop further  so that in 1967 Peterson began training in Washington D.C. for work with the American embassy in Brazil and from that point on doors swung open leading him to  an illustrious career in foreign service.

But in 1982, a pivotal event ensued as he was watching The Merv Griffin Show. Author and illustrator Benjamin Creme was one of the featured guests along with Gore Vidal. Creme discussed his book The Reappearance of Christ And The Masters of Wisdom. Creme clarified that “the one Christians call the Christ had reappeared and was living in a major industrial city in the Western world.” But his personal name was Maitreya.

Readers who are familiar with The Ageless Wisdom teachings introduced in 1877 by Helena Petrovna Blatvatsky and later elaborated upon by other theosophists such as Alice B. Bailey, will be riveted by Peterson’s narrative, however those unfamiliar will still be able to appreciate Peterson’s connection with Maitreya, the World Teacher.

Though the message may appear to be full of controversy for some, it is still one that brings hope for  those who strive for a future brotherhood of man.

Peterson explains Maitreya is called The World Teacher as he is the embodiment of all faiths and speaks to people of all cultures and traditions.

The book is invaluable in the sense that its message has the potential to build interfaith understanding in world divided by religious doctrine and dogma.

Peterson offers the reader detailed background information on his personal contact with Benjamin Creme, Transmission meditation, and Maitreya.  In sum, the book tells a powerful story of an individual on a spiritual quest who discovers an illuminating path. He teaches that humanity’s advancement can be attributed to the influence  of    “ a succession of enlightened teachers.”

Peterson asserts, “At the beginning of every cosmic cycle or age, a period of 2,250 years, the Spiritual Hierarchy of Masters sends one of  their own into the world. The Teacher provides a new message to guide the human race into the next era.”  Peterson’s intriguing narrative draws the reader to keep an open mind,  explore esoteric ideas, ancient teachings, and consider the possibilities about humanity’s spiritual evolution.

Filed under: Opinion, World
Share Tweet Pin G Plus Email
previous article: Photo Project To Document A Single Day Around The Globe
next article: Taking On The Skyscraper Sociopaths: Strip Away Their Masks — and Relax