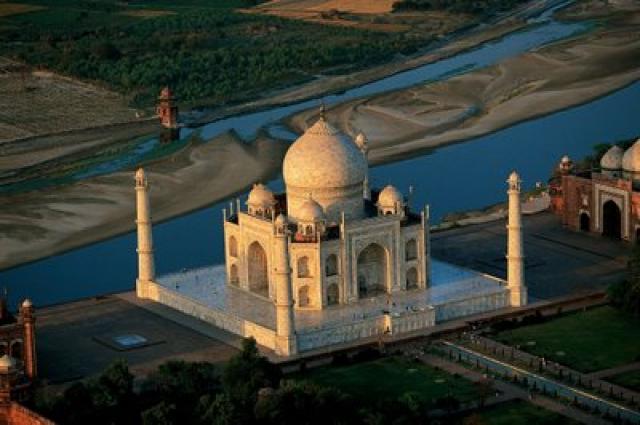 1.The Taj Mahal in is considered one of the best examples of Mughal architecture in . The history of the Taj Mahal is one of the great love stories of the world.
2.The Mughal Emperor Shah Jahan ruled from 1628 to 1658 and was married to Arjumand Bano Begum in 1612 A.D. He called his wife Mumtaz Mahal or Crown of the Palace, because she was so precious to him. Mumtaz Mahal and Shah Jahan had 14 children and the queen accompanied Shah Jahan everywhere, even on military campaigns. It was on one of these campaigns, in Burhanpur in central , that Mumtaz Mahal died in 1631, shortly after giving birth to her 14th child. Her dying wish to Shah Jahan was that he should "build a tomb in her memory such as the world had never seen before." The history of the Taj Mahal begins with Mumtaz Mahal’s tragic end.
3.Shah Jahan fulfilled her wish, creating the most beautiful mausoleum the world had ever seen. Shah Jahan was deposed by his son Aurangzeb. He spent the last years of his life under house arrest in the Agra Fort. He used to spend his time looking across the at the beautiful tomb he had built for his beloved empress, waiting for the day they could be united again. After Shah Jahan’s death in 1666 A.D., he too was laid to rest beside his beloved Mumtaz Mahal. Their real tombs are in a basement of the Taj Mahal. The two ornately decorated tombs on the ground floor, sheltered by the dome of the Taj Mahal are part of the stylistic design of this beautiful monument in . The history of the Taj Mahal is the history of the steadfast love of a Mughal Emperor for his Queen.
4.It took 22 years for the Taj Mahal to be completed. A huge labor force of 20,000 workers led by Muhammed Hanif, Shah Jahan, Indiathe head of the masons and the Persian architect Ustad Isa or Ustad Ahmad Lahauri, were employed in its construction. Finished in 1648, the Taj Mahal cost the Mughal exchequer 32 million rupees. The Taj Mahal has been described by the poet Sir Edwin Arnold, as"Not a piece of architecture, as other buildings are, but the proud passions of an emperor’s love wrought in living stones."
5.The aesthetic beauty of this beautiful mausoleum is enhanced by the romantic story that inspired its construction. Tourists come from around the world come to , to feel the aura of eternal love that surrounds the Taj Mahal. The history of the Taj Mahal is a love story that transcends time and continues to be retold each day to the tourists who visit the Taj Mahal in .