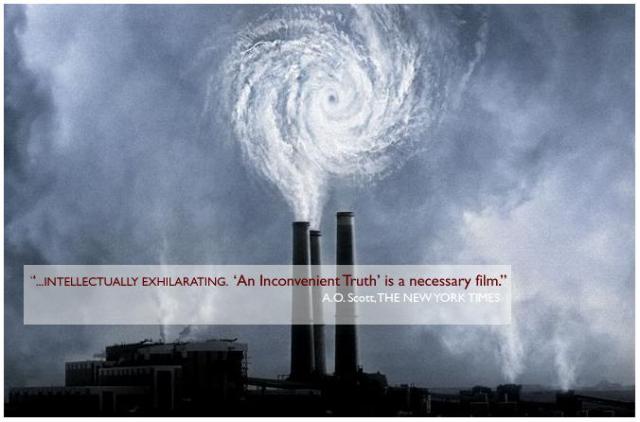 You look at that river gently flowing by. You notice the leaves rustling with the wind. You hear the birds; you hear the tree frogs. In the distance you hear a cow. You feel the grass. The mud gives a little bit on the river bank. It’s quiet; it’s peaceful. And all of a sudden, it’s a gear shift inside you. And it’s like taking a deep breath and going… ‘Oh yeah, I forgot about this’.

— Al Gore in the opening monologue of An Inconvenient Truth

An Inconvenient Truth focuses on Al Gore and his travels in support of his efforts to educate the public about the severity of the climate crisis. Gore says, "I’ve been trying to tell this story for a long time and I feel as if I’ve failed to get the message across." The film closely follows a Keynote presentation (dubbed "the slide show") that Gore presented throughout the world. It intersperses Gore’s exploration of data and predictions regarding climate change and its potential for disaster with Gore’s life story.

It weaves in events that changed his world view, including his college education with early climate expert Roger Revelle at Harvard University, his sister’s death from lung cancer, and his young son’s near-fatal car accident. Throughout the film, Gore makes comments regarding his loss to George W. Bush in the 2000 United States presidential election. For comic effect, Gore also uses a clip from the Futurama episode "Crimes of the Hot" to explain global warming.

In the slide show Gore reviews the scientific opinion on climate change, discusses the politics and economics of global warming, and describes the consequences he believes global climate change will produce if the amount of human-generated greenhouse gases is not significantly reduced in the very near future. A centerpoint of the film is his examination of the annual temperature and CO2 levels for the past 650,000 years in Antarctic ice core samples.

The film includes segments intended to refute critics who say that global warming is unproven or that warming will be insignificant. For example, Gore discusses the possibility of the collapse of a major ice sheet in Greenland or in West Antarctica, either of which could raise global sea levels by approximately 20 feet (6 m), flooding coastal areas and producing 100 million refugees. Melt water from Greenland, because of its lower salinity, could then halt the currents that keep northern Europe warm and quickly trigger dramatic local cooling there. The documentary ends with Gore arguing that if appropriate actions are taken soon, the effects of global warming can be successfully reversed by releasing less CO2 and planting more vegetation to consume existing CO2. Gore calls upon his viewers to learn how they can help him in these efforts.

Gore’s book of the same title was published concurrently with the theatrical release of the documentary. The book contains additional information, scientific analysis, and Gore’s commentary on the issues presented in the documentary. A 2007 documentary entitled An Update with Former Vice President Al Gore features Gore discussing additional information that came to light after the film was completed, such as Hurricane Katrina, coral reef depletion, glacial earthquake activity on the Greenland ice sheet, wildfires, and trapped methane gas release associated with permafrost melting.