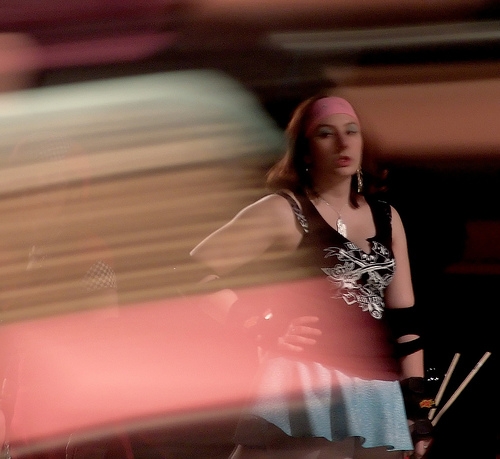 In a town where it rains more than half the year, there’s plenty of time to stay indoors and dream. Perhaps that’s why Portland has such a hot fashion scene these days, or maybe it’s just that the rest of the world is starting to notice what’s always been here. As featured in the Portland Mercury, “For years Portland has been building momentum towards national and international recognition, thanks to magazines like W, Elle, Lucky, Bust, Women’s Wear Daily, and Venus….” Not only are designers popping up all over town, but home grown stores such as Light Switch Clothing and Seaplane are stepping up to help them distribute Portland’s unique look to a wider audience.

But, “Portland?” you may ask. Nestled between Seattle and San Francisco, Portland has quietly become a lightning rod for new fashion and arts talent on the West Coast. A temperate and moist climate agrees with those who like to spend their time indoors or out. A high quality of life is the result of a very involved, forward-thinking, young and sometimes positively weird populace. These elements combine to form a great environment for trendy young things that like to do-it-themselves in a creative crucible. Portland’s runways tend to be public gathering places, concurrent with the populist leanings of this routinely “flown-over” little city.

Perhaps it’s events like the annual Portland Fashion Week. This extravaganza of local talent occurs every October to the accolades of an international audience. The 2006 event showcased the talents of such diverse designers as Poppi Swim and Sport, Sofada, Magalie Corzo, Ancient Inc, and J. Jewellery Designs. It’s like a coming out party for young, start-up designers and clothiers. Even the usually stodgy local news media are noticing, such as this story and slideshow about last year’s show as compiled by Oregon Public Broadcasting.

With all the quality fashion photographers in town, perhaps it’s just that much easier to get a really good collection portfolio produced. Portland has many photography studios and shops that cater to professionals and semi-professionals, as well as active photography clubs. Many designers in town choose to use local talent or even their friends as models. The result is a slick package that looks just a bit edgy.

Just maybe, it’s the focus on things made locally that is so strong in this City of Roses. Local nightclubs have monthly craft shows where many local designers practice their chops. Local purveyors usually known for serving desserts, coffee, seafood and books have all been fashion show venues in the last few years. Even the sidewalks of Portland are turned into runways during the neighbourhood coalition block parties and street fairs. Whether it’s first Thursday, Last Wednesday, Second Friday or just about any other day of the month, one of Portland’s very cohesive neighbourhoods has an event for local artisans to show their wares — anywhere from top-notch galleries to a blanket on the sidewalk.

Look for Portland, Oregon, to become the mouse that roared onto the international fashion scene in 2007. Once a town that many have accused of being stuck in 1987 since 1978 — perhaps it’s finally 1987 again.

Filed under: Music & Film
Share Tweet Pin G Plus Email
previous article: Best. Band. Ever. (?)
next article: Why Were Cloned Animals Declared Safe for Human Consumption by the FDA?