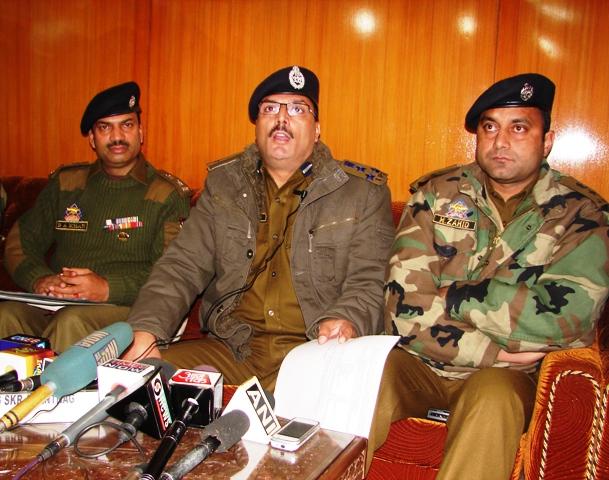 Addressing a Press confrence DIG South Kashmir S A Watli today said that large scale protests and stone pelting took place in various parts of during year 2010. It took some time to identify the mentors of stone pelting and protests. One person namely Showkat Ahmad Dar @ Adnan @ Basharat resident of Benderpora Bijbehara was arrested during a naka at Botengu Khanabal on December 05. Matrix code sheet, two Chinese grenades and Motorbike recovered from him during search.Police said.

Mr Watli said that during questioning it transpired that a module of militant is instigating the youth for resorting to stone pelting. Later on it came to surface, that there is a nexus between LeT and other militant organization for pushing the youths to resort to violence. In this connection recently three persons have been arrested in town Anantnag who are Fayaz Ahmad Talak, Javaid Ahmad Salfi and Fayaz Ahmad Dar.

He told reporters that this module was used to instigate by various means and ways, particularly by distributing provocative literature and video clips. The module was headed by one Showkat Ahmad Dar @ Adnan @ Basharat resident of Banderpora Bijbehara. Showkat Ahmad Dar is a close associate of LeT commander Firdous Ahmad Peer @ Gowhar and HM Commander Javaid Ahmad sheikh @ Seepani. Showkat Ahmad Dar used to meet all these persons in town Anantnag to plan future strategy. He also meet Mohammad Abass Sheikh resident of Rampora Kulgam and Fayaz Ahmad Talak in the town Anantnag and discussed their strategy to intensify the protests and stone pelting in Kulgam and Anantnag through associates. After some time a meeting was attended by Firdous Ahmad Peer @ Gowhar also with the above mentioned persons in the out skirts of Anantnag and Fayaz Talak was assigned the responsibility of printing and distributing the provocative posters among the youths. Abass sheikh was assigned the responsibility to intensify the protests in some parts of Kulgam while as Fayaz Ahmad Dar resident of Chee was given the area of Khanabal-Pahalgam road for organizing stone pelting and protests.

The arrest of Showkat Ahmad Dar has proved that there is strong nexus between LeT and the mentors of violent protests. Showkat Ahmad Dar and Fayaz Talak also used to get directions from Nawaz Ahmad Lone affiliated with Hurriyat-G with regard to the ongoing agitation, watli said.

It is pertinent to mention that all the arrested persons who are presently on police remand in the cases of stone pelting and arson are having links with the militant organizations particularly LeT. Among these Fayaz Ahmad Talak stands arrested in FIR No. 331/2010 of police station Anantnag. The other one namely Abass Sheikh has already been arrested in case FIR No. 139/2010 of police station Kulgam for his involvement in stone pelting and violent attack on Police.

Case FIR No. 437/2010 under section 7/27 I.A Act police station Anantnag has been lodged against these accused. Following recoveries have been made against accused shown against each. Showkat Ahmad Dar @ Adnan – two grenades, Fayaz Ahmad Talak – one grenade, Javaid Salfi – one grenade, Mohammad Abass sheikh – two grenades and Fayaz Ahmad Dar is arrested  under section 120-B.

On the information of another module of LeT which was active in the areas of Sangam, Naina area Awantipora police arrested one Muzaffer Ahmad Wani @ Bulbul son of Gaffar Wani resident of Brah Badna. On questioning, the arrested person disclosed that he is working for Lashkar-e-Toiba directly under the command of Abdul Rehman @ Noor resident of Pakistan and following are his associates namely Irshad Ahmad Wani son of Ghulam Nabi resident of Illahipora Pulwama, Shabir Ahmad Magray son of Ghulam Nabi resident of Nowpora Pulwama and Ghulam Mohi-ud-Din Mir son of Gaffar Mir resident of Achan Pulwama.

The disclosure further revealed that these persons were organizing protests and people from their area used to block and resort to stone pelting. On the arrest of these persons the following recoveries were made – 35 Kgs explosive, 75 detonators, 150 mtrs safety fuse, one pistol with magazine, eleven rounds of pistol ammunition, two hand grenades, one hand grenade with out lever, two IED’s fitted in pressure cooker, four combat uniforms and two pouches.

Muzaffer Ahmad Wani @ Bulbul is involved in grenade throwing at Bijbehara in which ten civilians got injured and among them namely Urfi Jan eight year old succumbed at SKIMS Soura, .

Irshad Ahmad and Ghulam Mohi-Ud-Din are in close contact with Rehman Bhai @ Noor resident of . They had been tasked to blow up newly constructed police post of Achan Pulwama. Two IED’s has been recovered from them.