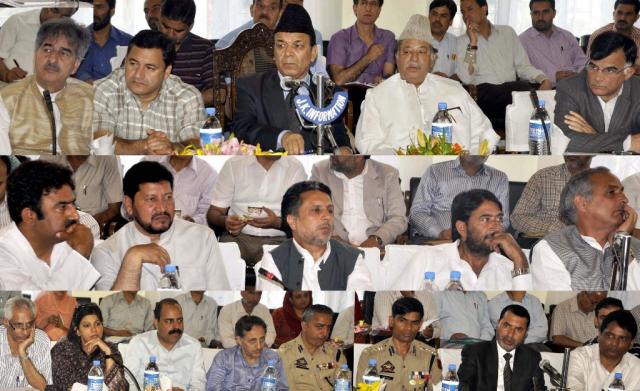 Anantnag/Srinagar, June 21 (Scoop News) –The current year’s Annual Plan for district Anantnag will be of the order of Rs. 122.13 crore, which is 8% higher than the last year’s Annual Plan. Of this, over Rs. 47.85 crore constitutes Revenue Component and Rs. 74.28 crore as Capital Component.

Approval to the Annual Plan was accorded at the District Development Board (DDB) meeting presided over by the Minister for Finance and Ladakh Affairs,  Abdul Rahim Rather, who is also chairman of the Board, at Dak Bunglow, Khannabal today.

Speaking on the occasion,  Rather asked the engineers and officers formulate only such projects which are technically feasible and economically viable adding that the faulty planning not only cause failure of the projects but also incur huge losses to the state exchequer. He asked the officers and engineers to prioritize the schemes so that need based works of prime public importance are completed within shortest possible time for the benefit of the people.

Responding to the demands of the legislators,  Rather assured that the matter regarding funding of 300-beded district hospital Anantnag will be taken up with the Union Health Ministry so that this prestigious project is completed at an earliest. He said construction of the railway bridge near Qazigund station will be again taken up with the concerned railway authorities so that difficulties confronting the people of the area are removed.

Saying that DDB meetings provide an opportunity to the district administration as well as legislators about the pace of programme implementation and execution on ground.  Rather called for fulfillment of all the Board decisions. “DDB meetings are a suitable plate form to highlight grievances and problems of the people through their public representatives”, he added.

District Development Commissioner, Anantnag,  Farooq Ahmed Shah while giving the resume of the last fiscal said that against plan availability of about Rs. 120.64 crore, Rs. 117.34 crore were spent during the last fiscal registering a significant 97% expenditure. He said 100% expenditure of about Rs. 20.73 crore has been registered in R&B sector adding that out of 16 targeted R&B schemes, 13 schemes were completed. He said under PHE sector, over Rs. 3.72 crore expenditure was booked which constitutes 99% of the total allocation.

Various important decisions were taken in the DDB meeting which include conducting fresh survey of Shah Khul under phase-II of CWC, preservation of Gandak Naag (Sulpher spring) Anantnag, Development of Khiram Shrine under pilgrim tourism, construction of water supply schemes in Dooru and Qazigund under UBISSMT Phase-II this year, release of Rs. One crore for construction of Trauma hospital, Bijbehara, installation of 25 kv transformers in 74 habitations of the district under RGGVY, making Marhama PHC as 24×7 unit, commissioning of water supply scheme at Banderpora, Wupzan and Gadhanjpora within one month, completion of WSS Anantnag within two and a half years, completion of Degree College, Bijbehara within two months.