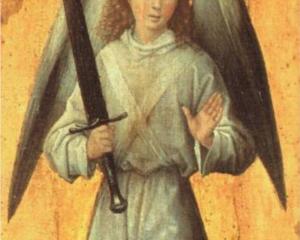 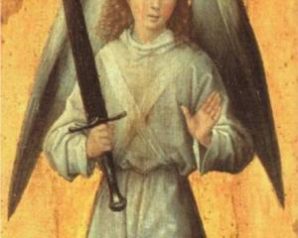 “But the prince of the kingdom of Persia withstood me one and twenty days: but, lo, Michael, one of the chief princes, came to help me; and I remained there with the kings of Persia”, Daniel 10:13 Pictured here: A depiction of Michael the Arch Angel in Catholic art.

I had the most interesting conversation with a catholic priest the other day, when we discussed the subject of angels for a few hours together over a meal.

Note: I cannot mention the priest’s name  in this report, as he requested that I not do so. I was actually there to express condolences over the killing of another priest in Phoenix recently.*

As is typical in such situations, however it was I who was actually consoled in this matter.

An angel (from the Greek ἄγγελος ángelos, “messenger”) is a supernatural being or spirit, often depicted in humanoid form with feathered wings on their backs and halos around their heads, found in various religions and mythologies.

The plural form is “angels.”

According to the priest angels are not composed of “physical matter” but are spirit beings created by God (Heb. 1:14). There are different orders , hierarchies or ranks of angels in heaven.

For example those that covered the throne in heaven were mighty “seraphim angels.”

The seraphim have six wings that hovered over the throne of God.  Their height estimated at close to 15 to 18 feet tall.  Two of the seraphim’s wings covered their faces because God is so holy that even the seraphim angels could not look upon God (Isaiah 6:2).  Another set of wings covered their feet for they were in the midst of holy ground where God abided and Moses (Exodus 3:5) and Joshua (Joshua 5:15) had to remove their shoes while in the presence of God.

Angels do have some “human features” like feet, voices, and faces (Isaiah 6:1-2), according to the priest who has a doctorate in Theology.

Angels in the Bible can appear in “human like form” and communicate directly with humans (Gen 16:1-12, Judges 13:1-20, and Gen 19:1-22).While angels are neither male nor female they always appear as a man when they take human form.

Angels are described as spiritual beings intermediate between God and men in the Bible: “You have made him (man) a little less than the angels …” Psalms 8:4-5).

They also give specific instructions or commands to humans sometimes (Josh 5:13-15).

In the New Testament angels have many interactions with humans:
In Luke 1:11,for example an angel appears to Zechariah to inform him that he will have a child despite his old age, thus proclaiming the birth of John the Baptist. And in Luke 1:26 the archangel Gabriel visits the Virgin Mary in the Annunciation to foretell the birth of Jesus Christ. Angels then proclaim the birth of Jesus in the Adoration of the shepherds in Luke 2:10.

Are angels with us?

The Bible tells us that Jesus, for example had a multitude of angels (Luke 22:43). Likewise in our case angels are our special guests.

We may have even encountered angels and not even known about it as the writer of Hebrews reminds us:

“Keep on loving one another as brothers and sisters.  Do not forget to show hospitality to strangers, for by so doing some people have shown hospitality to angels without knowing it” (13:1-2).

Lastly when we die, angels may be the ones that actually carry our spirit into the presence of God as Lazarus was “carried by the angels (plural indicates there may be more than one assigned to us) into Abraham’s bosom” after he had died (Luke 16:22).

* See article: Catholic priest’s own weapon used in killing of other priest in burglary https://groundreport.com/catholic-priests-own-weapon-used-in-killing-of-other-priest-in-burglary/

Filed under: Christian, Lifestyle
Share Tweet Pin G Plus Email
previous article: University of California students should not travel to Mexico for spring or summer break
next article: Senator Reid cautions us not to waste hundreds of billions on war when we could use that money to rebuild our infrastructure