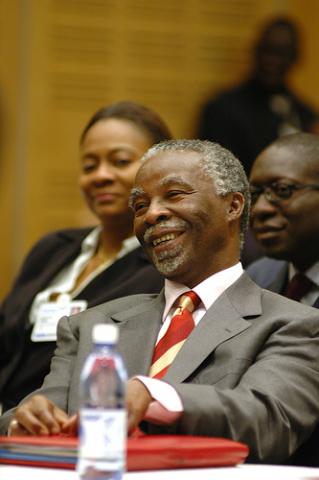 By Joseph Sithole in Harare.

Zimbabweans calling for the release of the long-delayed result of the presidential election have voiced anger and disappointment at South African president Thabo Mbeki’s statement that there is no crisis in their country.

The South African leader, who has always claimed that his policy of “quiet diplomacy” is the most effective way of dealing with Zimbabwe and who played the role of mediator in talks between the ruling ZANU-PF and the opposition ahead of the March 29 elections, made the remark after meeting President Robert Mugabe in Harare on April 12.

The following day, the Zimbabwe Electoral Commission, ZEC, announced a recount in 23 constituencies for all four elections – to the presidency, the upper and lower houses of parliament and local councils.

The opposition fears this means the still-unannounced result of the presidential ballot will be altered in Mugabe’s favour, and insists its candidate Morgan Tsvangirai has won outright.

Election officials continue to refuse to declare a winner. On April 14 the opposition called a general strike for the following day after losing a High Court bid to force the ZEC to announce the result of the vote.

The recount could also affect the distribution of seats in the lower chamber of parliament, the House of Assembly. As things stand, the main faction of the opposition Movement for Democratic Change, MDC, led by Morgan Tsvangirai, has 99 seats, ahead of the 97 won by ZANU-PF. The smaller MDC faction led by Arthur Mutambara managed to win ten seats, potentially giving the opposition 109 seats if it teams up with Tsvangirai’s people on legislation.

When the Southern African Development Community, SADC, a regional grouping in which South Africa is a key player, held an emergency summit in Zambia on April 12, many Zimbabweans expected it to issue a categorical demand for the ZEC to release the presidential result.

Mugabe clearly believed the same thing – he refused to attend, for the first time since taking power 28 years ago.

Earlier in the week, SADC members had expressed concern at the delay in releasing the poll results.

The Zimbabwean leader need not have worried, though. The communiqué released after the emergency meeting contained a feeble appeal to the country’s political leaders "to embark with humility and seize the opportunity to turn over a new leaf in their beloved country".

Mbeki set the tone of the meeting when he dropped into Harare and met Mugabe en route to Zambia.

Suggesting that the only real problem was the lack of a clear winner, and that this would require a second, run-off presidential election, he told reporters, "I would not describe that as a crisis. It is a normal election process, according to the laws of Zimbabwe."

Mbeki’s comments were in sharp contrast to a more robust statement made by the SADC’s chairman, Zambian president Levy Mwanawasa, when he called the summit last week.

Mwanawasa said the regional grouping could not turn a blind eye when "one of its members is experiencing political pain".

A veteran Zimbabwean journalist in Harare said he was "shocked" by Mbeki’s comments that there was no crisis, at a time when there has officially been no government in charge almost three weeks after the elections. As required by law, Mugabe dismissed the cabinet ahead of the election, although he has since recalled his ministers in move his opponents regard as illegal.

"Given the current climate of fear and anxiety, it is shocking that Mbeki can say such a thing. In the normal course of things, a new president should have been sworn in, or the old one sworn in if he had won," said the journalist.

“What we have is a president… now continuing to rule by decree because there is no cabinet and there is no parliament. These are elementary issues that Mbeki should be alive to, and yet he sees no crisis. Does a crisis necessarily mean dead bodies on the streets as happened in Kenya?"

A political analyst, who also did not want to be named, expressed similar concerns that Zimbabwe could descend into the kind of violence that erupted in Kenya over the New Year following a disputed presidential election.

"Mbeki is clearly not telling the full story about what is happening in the country," he said. "There can be a serious crisis in a country without people being slaughtered. Zimbabweans have so far rejected the Kenyan model because they believe the international community can help. But for how long can a people restrain themselves when the political situation continues to deteriorate?"

He claimed it was hypocritical of Mbeki to say there was no crisis when his own government was deporting hundreds of Zimbabwean economic and political refugees from South Africa every month.

The analyst suggested that the SADC’s hesitation to take a tougher line with Zimbabwe stemmed from a desire to somehow contain the crisis at a southern African regional level.

He said that members of the grouping feared that if the political stalemate were to be formally defined as a "crisis", it would need to be taken up by the African Union’s Council of Ministers and thereafter by the United Nations Security Council. That is something African leaders have always resisted, because they do not want former colonial powers, notably Britain, to seize the initiative from them.

"The real trouble is that opinion is divided on what to do, because none of the countries in the region can take unilateral action against Mugabe," said the analyst. "Legally, there is also nothing they can do – even as a group – except to rely on the goodwill of the member states. Unfortunately. Mugabe is proving not to be a neighbourly brother in his dealing with his comrades."

Mbeki’s latest comments have damaged his credibility with opponents of Mugabe.

"What does Mbeki mean by saying there is no crisis in Zimbabwe, three weeks after elections and there are no results?" said a senior researcher with a local think-tank. "Doesn’t a denial of the results constitute a violation of the people’s right to know? What was the whole point of this election if people are not told how they voted?

Expressing a view now held by many, she said, “I think Mbeki is becoming part of the problem. He is now complicit in our crisis and is doing a major discredit to his so-called ‘quiet diplomacy’, which has perhaps compounded our crisis."

She said there was now a need for the crisis to be acknowledged so as to open the way for intervention by the wider international community.

"So long as there is denial, there won’t be any action,” she said.

Joseph Sithole is the pseudonym of a reporter in Zimbabwe.  For more in-depth coverage, visit www.iwpr.net