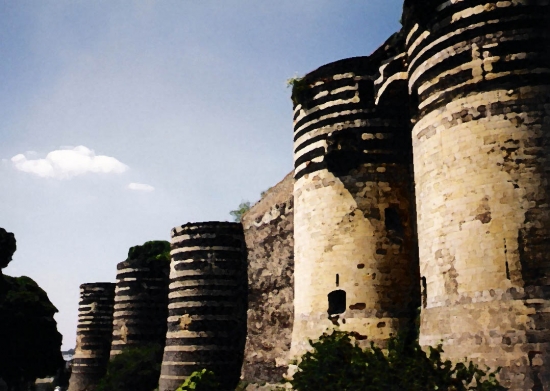 Over looking the river in , is the castle . The Romans occupied this strategic area long ago. During the 9th century the fortress came under the Counts of as part of the Plantagenet’s empire.

With 17 towers and 2000 feet in circumference it encloses 6.17 acres. In the early 13th century Louis IX had the chateau built. Rich in history, this castle has seen many notable figures from history. The Duke of , Hercule Francois courted Elizabeth I. Joan of Arc helped the Dauphin to seek sanctuary at the castle. The Dauphin would later become King Charles VII.

The Duke of in 1373 was inspired to have the Apocalypse Tapestry commissioned which is 140 feet long. This tapestry and others can be viewed at the castle. The chapel was added in 1412.

Through time the fortress has seen conflict. One of the inner walls bears the inscribed hat of the French Revolution. During the second world war the castle sustained damage that needed repair. Today the castle is open to the public. It is a wonderful example of history and art in the beautiful of   worth the visit.