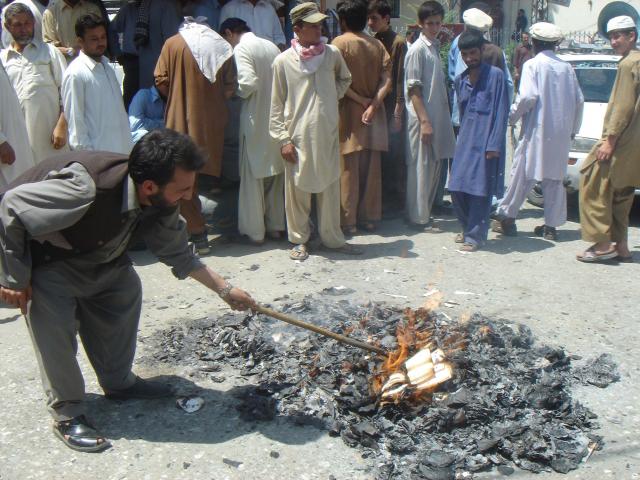 CHITRAL:   Hundred of anger protesters agitated against longest unscheduled load shedding at Ataleeq square. Hundred of protesters gathered in main square chanting against Peshawar Electricity Supply Company (PESCO) as well as against local administration. They were leading by Khan Hayatullah Khan a local social workers the protest rally converted in a public meeting. Hayatullah Khan, wing commander Fardad Ali shah and other delivered speeches on the occasion. They said that some 8 megawatt electricity generating by a non governmental organization, one mega watt by a private contractor, 6 megawatt by Sarhad Hydro Development Organization (SHYDO), one mega watt in local hydro power house and 33 KV carrying from national Grid Station Dir but even than people of Chitral are being depriving for 24, 48 and 72 hours continuously from electricity. They strongly condemned local staff of Pesco as well as district administration for badly failure in supplying electricity to its consumers. They expressed astonish that Chitral has no problem of energy crises because a huge quantity of power generating here but it is strange that where is consuming? . they warned the administration and Pesco Chitral by giving them 7 days deadline that if their problem was not solved they will block Shandor road for Very Important Persons(VIPs) on the occasion of annual Shundor festival. They also burnt (gutted) hundred of monthly utility bills of electricity and refused to pay them. Later on the anger protestors disbursed peacefully.
G.H. Farooqi PO Box NO.50 GPO Chitral Pakistan or Bank Islami Main Branch Chitral.
Telephone No.(0092) 03025989602, 03337069572, 03469002167, 03159698446, 0943-302295, 0943-316052, 0943-414418, 0943-320737
Email: gulhamad@gmail.com
Filed under: Lifestyle, World
Share Tweet Pin G Plus Email
previous article: Electricity bills burnt
next article: Sub standard material using in road construction