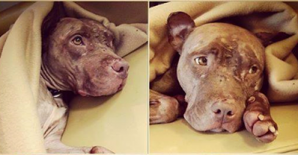 A $7,000 reward has been offered for the safe return of “Ginja,” the canine victim of a dogfighting ring, who was being housed at a Buffalo, N.Y. shelter after her owner was arrested. Ginja was seized in a felony animal cruelty case, and her owner, a peace officer, is facing four felony counts of training dogs for the purpose of fighting.  Four dogs were removed from the home, in malnourished condition, along with confiscated dog fighting equipment, and placed in the shelter.  It was from this shelter that Ginja, after the release of her owner, was abducted.

Animal rights attorney, Mr. Matt Albert, has called upon Guardians of Rescue to help him in these efforts and to see Ginja returned.  Upon hearing about the horrific details of this case, animal rescue group, Guardians of Rescue, added $5,000 to the $2000 already raised by Mr. Albert to aid in Ginja’s return.  Guardians of Rescue has also brought on a former FBI agent who is dedicated to this cause. Concerned advocates, who have dubbed themselves as “Ginja’s Gang” have been sweeping the city and handing out fliers to spread the word of Ginja’s reward.

“Ginja had found love at the shelter, and it’s depressing knowing she is probably having to fight for her life again,” says Matt Albert.

“The dog fighters are motivated in this cruel sport in part by money, so it is our intention to appeal to them on their level,” says Robert Misseri, president of Guardians of Rescue. “It is our hope that someone with connections to this ring will be enticed to receive the reward. We fear she was stolen from the shelter to be returned to the fighting arena to continue earning money.  This would surely result in more horrific injuries and her ultimate death. One look at the photos taken of her at the shelter proves this to be true – they are heartbreaking,” says Misseri.

“We are doing everything we can to help get the word out about this case, and encourage the community to help in the search,” says Misseri. “We won’t stop searching until she is found and we are able to give this loving dog the life she truly deserves.”

Guardians of Rescue provides assistance to animals out on the streets, helping to rescue them, provide medical care, food and shelter, and find foster home placement. To find out more about the search for Ginja, to make a donation or to learn more about Guardians of Rescue, log onto www.guardiansofrescue.org.

Filed under: Lifestyle, Pets
Share Tweet Pin G Plus Email
previous article: Which fish are right for my Aquaponics system?
next article: ANAND IS READY FOR CARLSEN AGAIN