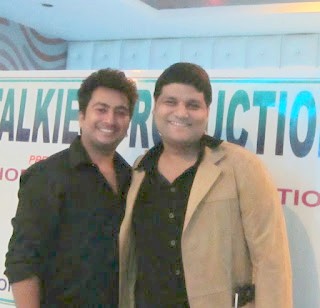 The very first workshop jointly based on Animation and Acting that was conducted by the production house ‘Phatta Talkies’ on 22nd of November 2015 in City Aligarh has been well received. It’s the first time that a workshop had been organized that brings two although different, but identical worlds together. While Actor Aayushya Krishnatreya took on the acting part and graced his presence with displaying some of the finest techniques of acting.

Internationally Acclaimed animation filmmaker Varun Mehta was invited to hold the animation workshop. He spoke to the young audiences about the possibilities of Animation World and how can it benefit them in future. He also displayed a Video Presentation of his finest work. The workshop started around 11:30 am and concluded around 3pm at Melrose Inn Hotel, Aligarh.

The show was organized by the key founders of Phatta Talkies production – Kumar Chandrahas, a well known poet and musician followed by his wife Mrs Kalplata Chandrahas who is also the co-founder of the production house and principal of Neehar Meera National Senior Secondary School Aligarh.

Professor Buddhsen Neehar, a well known poet also came up to appreciate the two young talents. Actor Aayushya Krishnatreya who has received training in method acting from the West Hollywood, Los Angeles USA had an extensive workshop and displayed a range of various Important exercises involved in Method Acting. He has worked on some International plays and a couple of short films.

Talking about the experience Mehta said – “It’s escalating to say the least. There’s nothing more satisfying when a bunch of teenagers come up to you after the show and tells they get moved and inspired, click pictures with you. The feeling can’t be explained. I would feel lucky if I manage to bring up even one percent of their unique passion to life”.