BORONGAN CITY, Eastern Samar, Philippines – Annaliz Gonzales-Kwan is a genuine individual whose conduct proceeds from goodwill and has a deep sense of propriety. She is a woman whose self-control is equal to all emergencies and does not make the poor man conscious of his poverty, the obscure man of his obscurity, or any man of his inferiority or deformity.

This amiable woman is the hope of Eastern Samar. She has a soft spot in her heart to the less fortunate people. 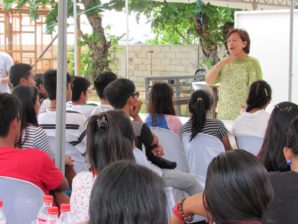 Couple of days before returning to Saudi Arabia, I had a chance to talk to her eye-to-eye, and I found her as a true mother and a good leader of the region. Sincerity to help, compassionate, down to earth, kindhearted, and approachable are but just few words to sum up her character.

Annaliz, a native of Guiuan Eastern Samar, does not flatter wealth, cringe before power, or boast of her own possessions or achievements. She speaks with sensibility and always with sincerity and sympathy; whose deed follows her word. She prioritizes the rights and feelings of others rather than her own. She appears well in any company – a woman with whom honor is sacred and maintains her virtues.

No doubt or hesitation is involved in her words and deeds. A complete person, highly responsible, upright, and honest, not scared to follow through with her sympathy and sincerity. Never held back or impressed by anyone, and woman of outstanding behavior. Not shrinking under pressure. Enhancing her qualities to get along with everyone and not above them. Accept other’s commandments gracefully and with no critical reservation.

To vouch for her credential, the 51 year old Annaliz, had graduated Bachelor of Science in Commerce Major in Accounting in De La Salle University, Manila. In 1986, she passed the Licensure Examination for Certified Public Accountant (CPA). She earned a Certificate on Business and Economics and attended Strategic Business and Economics Program as a scholar from the University of Asia and the Pacific. 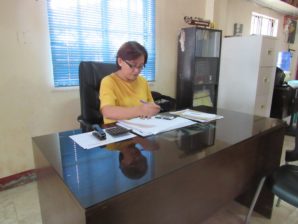 Annaliz Gonzales in her office

Currently, Annaliz is the president of Rural Bank of Guiuan, (Eastern Samar), Inc.

Annaliz was the first lady elected as Mayor of Guiuan Eastern Samar and served three terms. In 2013 Philippine election, she was a Congressional candidate but unfortunately, she loses against the arch rival incumbent Eastern Samar Representative Ben Evardone. 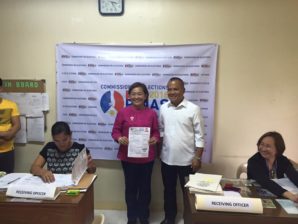 Annaliz introduced development on Eco-tourism in the super typhoon hardly-hit town of Guiuan making it potentially important destination in the country. She introduced disaster risk management to government and private sectors. Moreover, she introduces various development programs in the municipality of Guiuan making it one of the most vibrant and potentially progressive municipalities in the region.

Filed under: Community, Featured
Share Tweet Pin G Plus Email
previous article: An interpretation of The Face of an Angel by Michael Winterbottom
next article: Developing responsible citizens and global business leaders at XIMB, XUB.