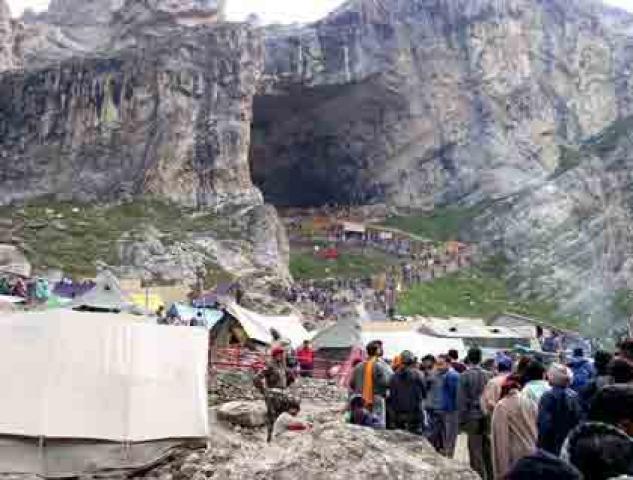 Mahant Deependra Giri, the custodian of the holy mace of Swami Amarnathji, issued the schedule for the ritual phase of the annual Shri Amarnath yatra, which will begin on July 7 and end on August 7 two days after Raksha Bandhan.

"The Charri Mubarak (holy mace) shall leave for Pahalgam at 7.00 a.m from Dashnami Akhara Srinagar on July 7 on the occasion of Vyas Purnima. Bhoomi Pujan and Dhwajarohan ceremonies shall be performed at the resting place of Charri Mubarak at Pahalgam," the Mahant said in a statement here.

He said after performing the rituals, Charri Mubarak shall return to the Dashnami Akhara the same day. Pujan shall also be performed at historic Martand temple at Mattan in Anantnag district on way back to Srinagar from Pahalgam.

On July 22, the Charri Mubarak will be taken to the Shankaracharya temple on the occasion of Amavasya and after prayers it will return to the Dashnami Akhara, the Mahant said.

The next day, the Charri Mubarak will be taken to Sharika Bhawani Temple at Hari Parbat in down town city. Charri Sthapna will be held on July 24 at Dashnami Akhara followed by Charri Pujan two days later.

The holy mace of Lord Shiva will commence the journey towards the cave shrine in South Kashmir Himalayas through traditional Pahalgam-Chandanwari route on July 31. "The procession of the holy mace will start at 9.00 a.m for night halt at Pahalgam. Pujan will be performed at Sreshwar Temple at Sonawar, Shiv Temple Pampore, Shiv Temple Bijbehara, Martand Tirth at Mattan and Ganesh Temple at Ganeshbal in Pahalgam," the Mahant said.

On August 1, pujan will be held on the occasion of Ekadashi while the holy mace will commence the onward journey towards Chandanwari on Dwadashi on August2.

The next day, Tryodashi, Charri Mubarak will leave for Shehnag for night halt and move from Sheshnag to Panchtarni on Chaturdashi on August 4.

"The holy mace will leave for the cave shrine on August 5, Purnima. Prayers will be offered at the cave and the Charri Mubarak will leave for Panchtarni before dusk the same day," he added.

The Purnima coincides with Raksha Bandhan, which marks the culmination of annual yatra and the cave shrine will be closed for devotees till next year.

Pujan and visarjan ceremonies will be held on Dwitiya, August 7, on the banks of river Lidder. "With this last ritual, annual pilgrimage of Swami Amarnathji shall culminate and the Charri Mubarak shall return to its abode at Srinagar," the Mahant said.

He said the Dashnami Akhara Trust has made all the arrangements like previous years for Sadhus coming from across the country for annual pilgrimage. "Food and accommodation has been arranged for the Sadhus at the Akhara Building in Srinagar for their comfortable stay,’ he added.