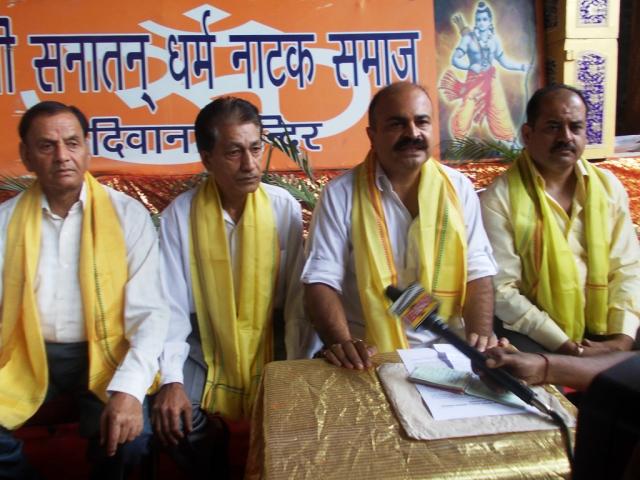 , October 15 (Scoop News)- The annual religious Ramleela in Dewan Mandir complex will commence on October 16 and come to an end on October 24, the day when Dussehra programme is held at Parade. This was announced by Sanatan Dharam Natak Samaj Dewan Mandir, Chairman Yudhvir Sethi while addressing a press conference on Monday.

Yudhvir Sethi said that Sanatan Dharam Natak Samaj has achieved the distinction of performing the Ramleela for the last 150 years in Dewan Mandir. It also goes to its credit that it has produced dozens of artists at international and national level many of whom even earned name and fame in Bollywood, Artists like Om Parkash, K.L Sehgal reached new heights and brought laurels to the state, Jammu in particular and Santan Dharam Natak Samaj is continuing with its old tradition and adding new feathers to it with each passing year.

Yudhvir Sethi said that one of the most distinguished feature of Sanatan Dharam Natak Samaj has been that during the Ramleela, the characters are played not only by Hindus but, Muslims too have been part of Natak Samaj for decades and this year’s characters are being played by a number of Muslim brothers and sisters, which is a live example of social fabric and oneness.

Sethi said during the week long staging, Ramleela also displays various characters showing unity, power, devotion, selfishness and end of evil by good way. IT end with a message to fight injustice, discrimination, terror, cheating and other social evils. He appealed the people from all sections of the society, including old, young, women and students to come and watch the week long religious festival and adopt good teachings in their lives.