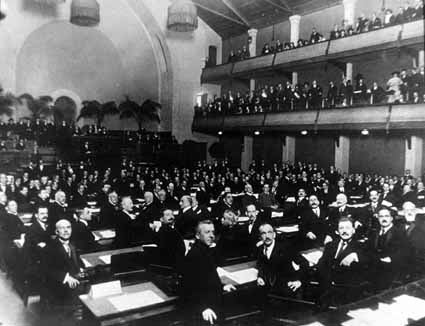 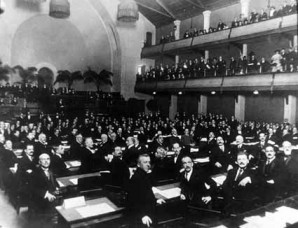 Today Europe is on the verge of international security system (ISS) total collapse. Collapse of the system that was under construction for at least 50 years. Current events are strangely reflecting the situation with the League of Nations after World War I, once again confirming the theory of history relative cyclicity.

It would seem that in normative ISS must fully ensure stability in the international arena, but it is in theory, in practice, the UN Charter, and further supporting agreements/treaties turned out to be only a “colossus with a clay feet.” Today Ukraine, on the territory of which the scenario of hybrid war in the 21st century is being played, has become a litmus, which reveals the ineffectiveness of the above mentioned instruments of peace.

Starting with Helsinki Agreements, the terms and conditions of which the RSFSR and Ukrainian SSR adopted as conditionally independent entities within the USSR, the formation of a new ISS began. This document, respectively, became the basis for OSCE and its regulatory framework creation. In short the essence of all treaties is “… non-use of force and recognition of the inviolability of member states borders.” In addition, and it is more importantly, they “… abstain from any direct or indirect intervention …” and “… the creation of occupying territories …”.

And we are not taking into consideration the notorious Budapest Memorandum, which was signed with the purpose to ensure the security of Ukraine. According to it, the Russian Federation should act as a main guarantor. Thus, the nuclear potential of Ukraine was transported to the territory of Russia.

Binded with a treaty obligations, adopted in the dispositive form, the Russian Federation has violated each of them and created a new precedent of the outrageous and daring non-compliance with ISS principles in the 21st century. Such unpunished international crimes may authorize the realization of the right of strong or aggressive action to promote cultural and territorial substrate in the ideology of a particular country. For example, Hungary may infringe on the Romanian Transylvania, Romania on the Serbian Wallachia, Serbia on Croatian Dalmatia and the list may be continued… Of course, such scenarios are excluded by the level of countries integration in the political/economic space of the EU and NATO and by the absence of nuclear weapons, which is an important lever of influence on the consequences of ISS principles breach.

It is accepted in the world historiography to blame the League of Nations as an inactive organization which didn’t fulfill its functions. But at least, LN was able to exclude the aggressors from its ranks, as it did with the Soviet Union, which started the Winter War in Finland, having annexed the Karelia in result. But today Russia continues to be one of the five permanent members of the UN Security Council with a power of veto. Such mechanism makes the aggressor unpunished.

Of course, the Russian Federation successfully and confidently works in other areas, using all the instruments of influence. Each post-soviet country which came out of the Kremlin’s influence have already suffered – Georgia, Azerbaijan (affected by the partial Russian aggression during the conflict in Nagorno-Karabakh), Moldova and Ukraine. Nowadays, all the other former republics are in the sphere of Russian influence. The another one category is the Baltic countries. Now they are the first target of Russian multiagression. Instruments of influence are the same: economy, resources, culture and media pressure.

Having fewer opportunities than in Ukraine, Russia also uses the presence of Russian-speaking minorities in the Baltic countries, including Estonia and Latvia, where their amount is about 15 percent. Russia permanently states through the Minister of Foreign Affairs or through the ambassadors about the oppression and violation of the Russian-speaking minorities rights. Recently Konstantin Dolgov in his Riga speech accompanied by rhetoric of “neo-Nazism” escalation, confirmed the above mentioned statements. During the last decade such rhetoric has increased due to the rejection of the Soviet past by some countries. And all this is accompanied by the Russian media, oriented and distributing their broadcasting to the West.

Embargo and resource constraints have already became a traditional tactic of the relative influence on domestic policy, because Soviet-era infrastructure of all the Baltic countries was built by former RSFSR.

Continuing saber-rattling and violating the airspace of some countries, the Russian Federation affords a paramilitary operation on the Europe borders.

It should be clear for the EU- the aggressor is able to do anything in relation to any country, despite of the NATO member status. Therefore, the policy of pacification with a view not to lose benefits is not the best variant, especially when the activities is permanently deploying very close to the EU. And because the scenario has repeatedly worked out, and in some case, as the President Putin stated during the interview on military operation in Crimea: “We are ready to go to the end.”