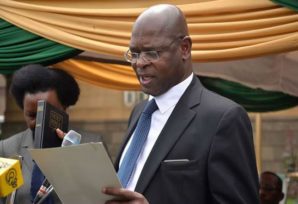 The Anti-graft boss Philip Kinisu has been implicated in a firm that used to do business with National Youth Service (NYS) been investigated by the commission on allegation of corruption.

NYS scandal led to taxpayers’ money was allegedly lost through fraudulent payments is being investigated by the EACC, raising concerns of conflict of interest by CEO of the commission.

This has arose questions whether the Ethics and Anti-Corruption Commission (EACC) is in the capacity to do a free and independent investigations in the NYS scandal where millions of shilling was lost through corruption.

Last week Kinisu confirmed that his company dubbed Esaki Limited received Sh35.4 million from the National Youth Service (NYS) over the past three and a half years, to supply borehole materials to NYS between October 2014 and November 2015.

This has attracted investigation by the Directorate of Criminal Investigations (DCI), Assets Recovery Agency and Kenya Revenue Authority in to Esaki’s dealings with NYS and the ministry of Devolution.

However, Kinisu failed to rule out involvement of EACC employees in the efforts to eject him out of the commission.

According to him, this is due to plans by the commission to have its staff vetted a fresh; in afford to weed out those found unfit for service had stalled stopped.

“All contracts between the company (Esaki) and NYS were won and performed prior to my appointment as EACC chairman. The allegations are unsubstantiated and yet we have been tried and convicted in the court of public opinion,” stated Kinisu.

“The accounts for past years have been audited and filed with authorities as required by law. We also analyze the main sources of that income showing what came from Devolution Ministry and NYS,” stated Chebukati through a statement.

On the other hand, the African Population and Health Research Centre, an NGO where Kinisu is the chairs is being investigated for money laundering, diversion of donor aid and regulatory mischief, adding trouble for EACC boss involvement in corruption activities.

This was initiated by the NGO Coordination Board Executive Director Fazul Mohamed’s letter to National Intelligence Service (NIS) Director Philip Kameru requesting for preliminary investigations in to the NGO.

The fact that the company is owned by the family of the EACC chairman raises questions about possible conflict of interest in his duty.

However, Kinisu said such a possibility does not arise. “This company has been run above board by my wife since it was formed. Where is the scandal in all this?” he questioned.

Kinisu has blams his problems on powerful cartels who want to frustrate the war against corruption mainly on case considered ‘high-profile’.

“I’m convinced I am targeted for intimidation, malice and harassment for fighting against corruption,” said Kinisu adding that he will not resign.

“I see these events as evidence our work are beginning to have an impact. I remain committed to this fight,” he said.

Furthermore, a civil society group, of receiving fraudulent proceeds from NYS through a company, Esaki Ltd, owned by his wife and accusing the EACC of dragging its feet on the NYS investigation.

These include Bunge La Mwananchi who wrote, to EACC’s CEO Halakhe Waqo last month demanding investigations into the dealings of Esaki.

“We wish to categorically state the fact that this specific case is quite interesting since the respondent … is allegedly related to the Chairperson of EACC and it will be interesting how this particular case is dealt with,” reads the letter dated June 23.

He said the claims were orchestrated by individuals being investigated for corruption by the commission.

“The challenges are manifestations of corruption fighting back. The fightback is vicious and has demonstrated the danger that I and my fellow commissioners and to an extent our staff face,” he said.

He said that before he took office, he had declared that he was an interested party in Esaki Ltd.

The allegations come eight months after Kinisu was appointed by President Kenyatta to head the anti-graft body.

Kinisu replaced Mumo Matemu who resigned in May last year following infighting between him and his deputies Irene Keino and Jane Onsongo.