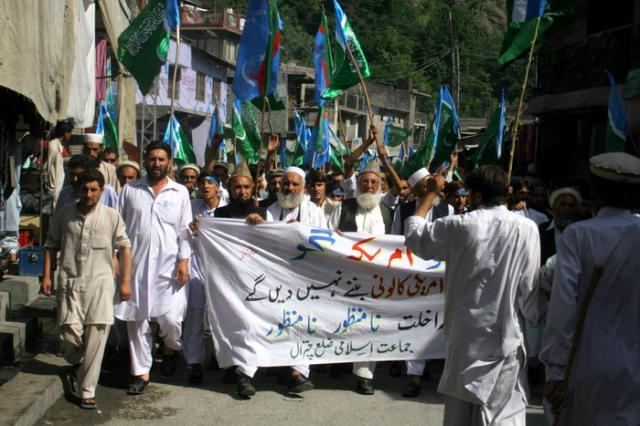 Hundreds of people from different walks of life participated in the rally including shopkeepers, students and politicians.

The rally started from Chew Bridge and the participants were chanted slogans of “Go America Go” that came to an end at Polo ground Chitral.

However, the rally ended at polo ground Chitral where the speakers addressed the protest rally.

Later on, the speakers passed a resolution unanimously to stop the drone attacks on the tribal areas that are killing the innocent civilians.

They strongly condemned the U.S drone attacks and urged the Pakistan government to start negotiations with the militant groups because war is not the solution of conflicts.

They severely criticized the PPP (Pakistan Peoples’ party) cooperation with U.S and the America’s open intervention into Pakistan’s affairs.

They said Pakistan is a sovereign and independent country and we would no more let the Americans to dictate us., we have an elected parliament and all the issues should be resolved through the parliament.

Pakistan was achieved in the name of Islam and Sharia and we want immediate enforcement of Islamic Sharia in Pakistan, they added.

Mr. Siraj-ul-haq, while addressing the rally said that our roads and airspace are being used as a supply line for the  U.S and NATO troops, beased in Afghanistan.

He said former Military dictator, Pervaiz Musharraf’s policies are in practice and we do not see any change with the elected government and parliament.

Pakistan is suffering from leadership crisis therefore the time has come to be united and get rid of American slavery, he added.