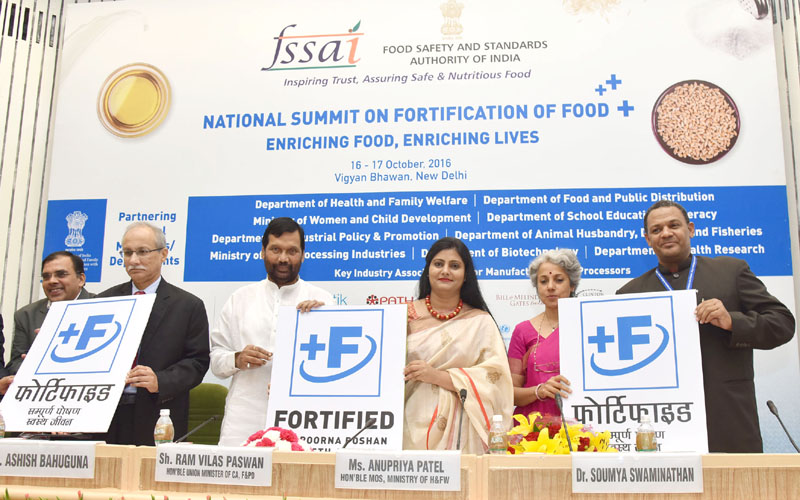 The Union Minister for Consumer Affairs, Food and Public Distribution, Mr. Ram Vilas Paswan and the Minister of State for Health & Family Welfare, Mrs. Anupriya Patel launching the food fortification logo, at the inauguration of the two-day National Summit on Fortification of Food, organised by the FSSAI, in New Delhi on October 16, 2016. The Secretary, Directorate of Health Research & Director General, Indian Council of Medical Research, Dr. Soumya Swaminathan and other dignitaries are also seen.

The Control Of Micronutrient Deficiencies Is An Overarching Effort Of The Government To Fight Hunger And Malnutrition In The Country: Anupriya Patel

New Delhi (PIB-GR-TYP-BIN): “The control of micronutrient deficiencies is an essential part of the overarching effort of the Government to fight hunger and malnutrition in the country.” This was stated by Mra. Anupriya Patel, Minister of State for Health and Family Welfare. She was speaking at the inauguration of National Summit on Fortification of Food to address interventions in combating micronutrient malnutrition in the country on Oct 14. Mr. Ram Vilas Paswan, Union Minister of Consumer Affairs, Food and Public Distribution also graced the occasion.

Speaking at the function, Mrs. Anupriya Patel said that food fortification is a proven and effective strategy to meet the nutritional needs of a large number of people across various sections of the society, including the poor and underprivileged as well as the vulnerable, such as pregnant women and young children. “Fortification requires neither changes in existing food patterns, habits nor individual compliance. It is socio-culturally acceptable and does not alter the characteristics of the food. It can be introduced quickly and can produce nutritional benefits for populations in a short period of time. It is safe and cost effective, especially if advantage is taken of the existing technology and delivery platforms,” the Minister elaborated.

Emphasizing further the need for food fortification, the Minister said that food fortification reinforces and supports existing nutrition improvement programmes and is part of a broader, integrated approach to prevent micronutrient deficiencies, thereby complementing other approaches to improve health and nutrition.

Speaking on the occasion, Dr. Soumya Swaminathan, Director General, Indian Council for Medical Research (ICMR), said that nutrition is a major determinant of health. She also added that macro and micro nutrients deficiency will lead to risk factors that may cause various diseases like TB, anaemia, etc. She informed that ICMR has planned to conduct health and nutrition survey to get first hand insights about nutritional values of the food consumed by the people of the country. Dr Swaminathan laid stress on the need to raise awareness and educate people about balanced diet.

Also present at the function were members of the food sector fraternity including the science community, industry – big corporates as well as small and medium food businesses represented by their associations, consumer and citizen organizations, international organizations and development partners, experts and government officials from Central ministries and States and other key stakeholders.