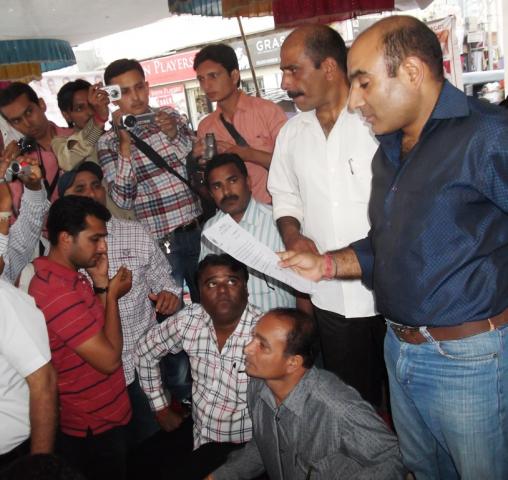 Porbandar/ Jammu, February 14 (Scoop News) – All parties Migrants’ Coordination Committee (APMCC) today formally called off his 15-Day long fast unto death at Porbandar Gujarat after Jammu & Kashmir Government issued a written appeal in this regard and assured him that the government was seized of the issues and the same were being examined at the appropriate levels.

“Vinod Pandit called off his fast unto death after J&K Government issued an appeal through its Revenue, Relief  and Rehabilitation Minister Aijaz Ahmed Khan requesting him to end the fast as the government was seized of the issues and was examining his demands at the appropriate levels”, King C Bharati, National Spokesperson told reporters here.

“I talked to the minister on phone who requested us to end the fast as Pandit’s health was deteriorating saying the J&K government as well as Gujarat government were very much concerned about the health of Vinod Pandit and it was not advisable to wait till an representative is deputed from J&K Govt keeping in view the condition of Pandit, so it is earnest request of the government to end the fast on our written assurance immediately to save his life, after which Vinod Pandit decided to end the fast”, Bharati said.

He said that the condition of Vinod was a matter of concern as he was on fast for 15 days and had lost more than 10 kgs of weight and his BP and pulse rate had started going haywire, while Acetone levels in urine had also gone beyond +3 and it was decided to save his life as the J&K Government had already given an written assurance and waiting for someone to come from J&K might have put the life of Pandit into grave danger.

Sandeep Bhat, incharge Kashmir and Sunil Kumar Trakroo, Coordinator Punjab and Haryana who have been with Vinod Pandit since day one said that they were satisfied from the agitation as it was for the first time that the J&K government had atleast accepted that there were issues and has given a written assurance in this regard.

Ram Dasa, APMCC Porbandar coordinator said that it was not only the achievement of Kashmiri Hindus but all the Hindus of the country and residents of Porbandar in particular who showed exemplary support during the agitation adding all Gujaratis were behind Vinod Pandit for any agitation in future.

Talking to reporters Bharati said that even though Vinod Pandit was hospitalised last evening the formal announcement of calling off the agitation was made today after examining all the issues, assurance of the J&K Government, verbal assurance of the minister and with the consent of the core group including the supporters of Porbandar

He thanked the supporters for the unconditional support during the agitation and specifically mentioned the residents of Probandar who were with them day and night and all those who supported from outside in organising various protest demonstrations all over and through social media to highlight the issues.