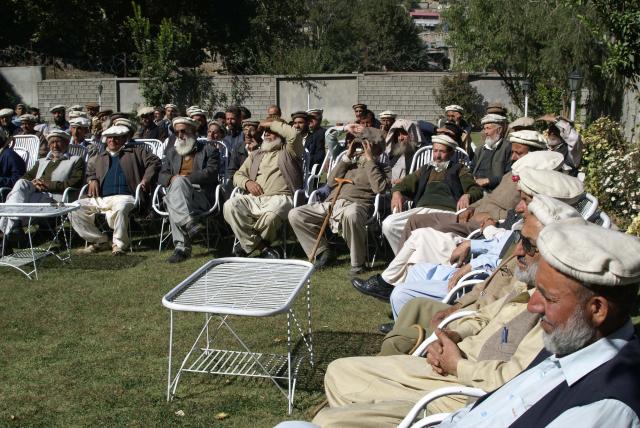 CHITRAL:  A meeting of party workers of All Pakistan Muslim League (APML) held under the chair of Haji Ghulam Muhammad MPA Chitral wile barrister Muhammad Ali Saif general secretary of APML was also present on the occasion. Addressing to the party workers leaders of different union councils expressed their full confidence on Gen retired Parvez Musharaf and declared him as beneficent of Chitral ( Muhsini  Chitral). They said that Chitrali people never forget their  benefiters  and any leader who support them. They said that we were facing a long distance and great mental torture while travelling to down districts via Afghanistan because of closing of Lawari top due to heavy snow fall. But Parvez Musharaf excavated Lawari tunnel and now we can go to Peshawar inside the tunnel easily. Barrister Saif said that Musharaf will address to Chitral people through telephonic video link at polo ground and it is expected that he will announce regarding contesting election from Chitral consequency. They alleged the present federal government who did nothing for construction of   Lawari Tunnel and now at the end of their regime federal Minister communication visited Lawari tunnel by announcing work on the tunnel which is joking with the public. Participants assured that we must cast our vote for Parvez Musharaf irrespective to our party and political affiliation. A large number of people participated in party workers meeting. District president of APML Shahzada Khalid Parvez and MPA Ghulam Muhammad Also spoke on the occasion.
G.H. Farooqi C/O Manager bank Islami Main branch Chitral phone No 0943-320737, 0943-316052, 0943-414418  , 03025989602, 03337069572, 03159698446, 03469002167
email: gulhamad@gmail.com
Filed under: Politics, World
Share Tweet Pin G Plus Email
previous article: Dr. Okonjo-Iweala is Nigeria’s greatest link not weakest
next article: CONFUSING TIMES IN KASHMIR!