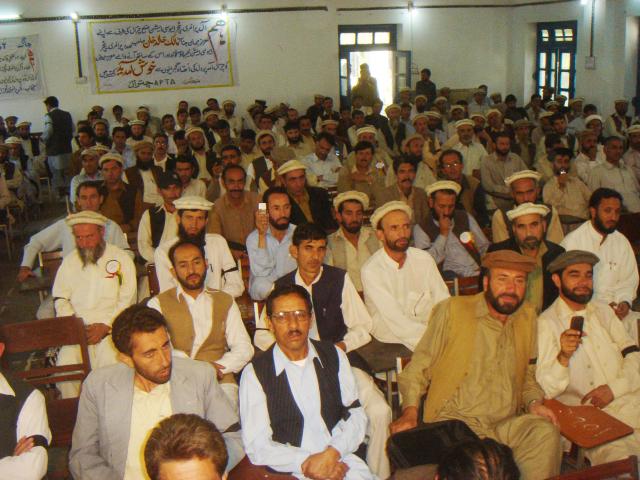 CHITRAL: All Primary Teachers Association (APTA) Chitral arranged a one day teacher’s convention at Government Commerce College Hall Chitral which was successfully concluded. Provincial president of APTA Malik Khalid Khan was chief guest on the occasion. Addressing to the convention cabinet member of APTA Chitral said that teachers are architect of the nation but here we are being treating as step mother behavior. They said that a primary school teacher (PST) is giving scale 15 in Sindh and other provinces but here in our KP province a PST recruit in basic pay scale 7 and retire in scale 9 maximum. They also announced for launching province vise protest in favor of their demands which they already had sent to provincial government and high ups of education department. They announced that APTA of Khyber Pahton Khwa have already started their token protest by wearing black ribbon on their arms from 1st October  which will be continue up to 8th October. All Primary Teachers of KP province will boycott from classes for two hours at day (9:30 to 11:30)  to register their token protest from 10  to 22nd October and if their genuine demands were not fulfilled they will boycott from classes completely from 24 October until fulfillment of their demands. During teaches convention APTA Chitral presented traditional cloak of Chitral as a gift to Provincial president and finance secretary. They demanded for renewal of service structure and to compensate Primary teachers because they are suffering badly. Addressing to the convention provincial president Malik Khalid determined that he will never bargaining on their rights.  He said that I always dislike those teachers who not perform their duty honestly but always fight for genuine rights of APTA A large number of teachers attended the teachers convention. Provincial President of APTA Muhammad Ashraf thanked all participants and assured them that he and his cabinet will fight for their rights at each platform.
1 injured in land dispute.
CHITRAL: As well as one person were badly injured on land dispute at Jughor village Chitral. According to Station House Officer police station Chitral Sub Inspector Zafar Ahmad told this scribe that two parties of Jughor village had some land dispute. The local court verdict in favor of Ziaur Rehman group. When they want to do some work in their land the opponent group started indiscriminating firing on them as a result Ziaur Rehman son of Kifayatur Rehman received several injuries in his head, chest and hand. Hence his other colleagues Ibadur Rehman and Khair Rahman were survived. Chitral police on direction of District Police Officer Abdul Rashid took quick action and raided at the house of accused  Amir Hussain. Police also arrested main accused Amir Hussain son of Hussain Khan resident of Dawashash Jughor on the spot and recovered  China, 12 Bore and 3 not 3 Rifles from his posses. Chitral police lodged FIR against Amir Hussain under section 324, 147, 148, 149 Pakistan Panel Code and started further investigation. Chitral police also revealed that accused Amir Hussain is serving at District Headquarters Hospital in TB control program. A relative of injured person told that Amir Hussain also had opened firing on him as a result he received injuries on his head but he was acquitted and this is second time of his murder attempt.
G.H. Farooqi PO Box NO. 50 GPO Chitral OR Bank Islami Main Branch Chitral
Telephone No. 03337069572, 03469002167, 03159698446, 03025989602, 0943 3207373, 0943-316052 and 0943-414418
email: gulhamad@gmail.com
Filed under: Media & Tech, World
Share Tweet Pin G Plus Email
previous article: MLB 2011: Playoff Schedule-Starting Pitchers-TV- 10-02: Series Scores
next article: One injured on land dispute