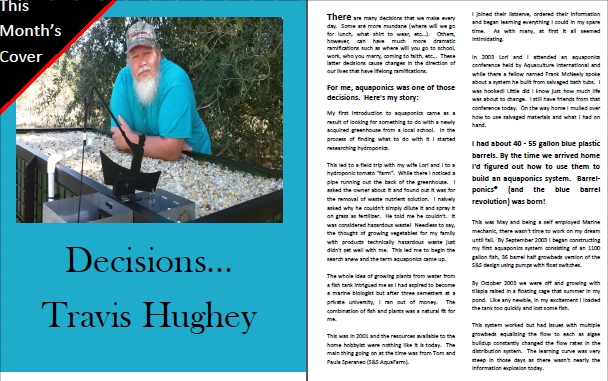 It’s no secret that the world’s food supply is finding it hard to meet the demands of a growing population. Food prices are soaring worldwide and the average family is struggling to put food on the table. Many are now realizing that in order to reduce their costs at the grocery store, they must grow food of their own. Aquaponics has been the answer to that dilemma for lots of people. It is a great way to grow nutritious healthy food and save money at the same time.

In the February 2014 issue of the ASC magazine, Travis Hughey shared his story with us.. Travis began his journey into Aquaponics back in 2001. He had acquired a greenhouse and he was looking for the best way to utilize it. Travis investigated the idea of hydroponics, but later decided it wasn’t the right fit. In 2003, Travis and his wife Lori attended an Aquaponics conference and their passion grew from there. http://aquaponics-how-to-guide.info/aquanewsletter/ 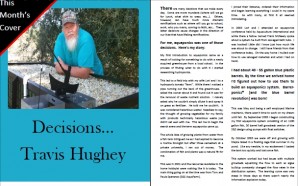 Here’s what Travis had to say about the conference: “In 2003 Lori and I attended an Aquaponics conference held by Aquaculture international and while there a fellow named Frank McNeely spoke about a system built from salvaged bath tubs. I was hooked! Little did I know just how much life was about to change.” https://www.facebook.com/AquaponicsSurvivalCommunities

On the way home Travis was thinking about the materials he had on hand to build his own system. He knew he had lots of blue barrels and could adapt them into an Aquaponics system. Travis built his system and became the inventor of Barrel-Ponics at the same time. He has shared his Barrel-Ponics plans across the world with others, so they could build an affordable system. His passion to help and teach others is something truly commendable. We are so proud that Travis shared his story with us and is now a regular contributor to our magazine. For more great articles like this, please join our magazine or community by following the links in the article.