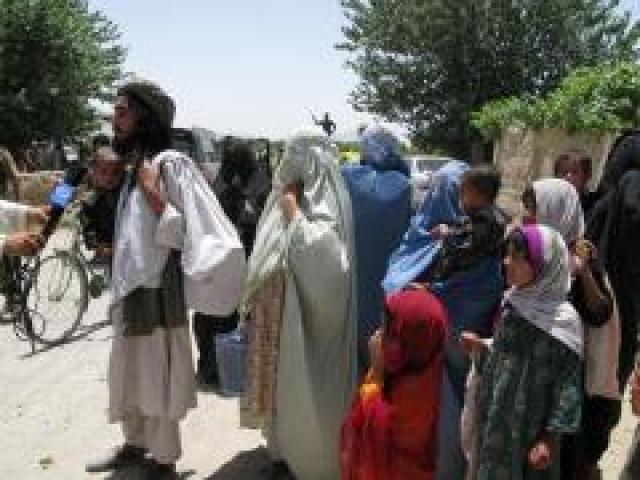 By IWPR contributors in Kandahar and Abaceen Nasimi in Kabul

Life is returning to normal in Arghandab, a verdant corner of the generally arid Kandahar province. Most of the Taleban fighters are gone, and specialists have moved in to clear the mines they left behind.

Even before the government gave the all-clear, residents risked life and limb to get back to their gardens, their grape arbours, and their livestock.

“I abandoned my cows and my goats,” said one woman, who did not want to give her name. Together with her four children, she was walking in the hot sunshine along the main road from the city of Kandahar to Arghandab.

She looked very tired, but was determined to get home.

“I don’t know whether my animals are alive or dead,” she said, without stopping. “It is those animals that provide food for my children.”

Mohammad Seddiq, a resident of the village of Munare, was also on the road, with his wife, mother and two sisters.

“We left the house with everything in it, and went to stay with relatives in the city,” he said. “I have a small plot of land, and I have worked hard all year. Then the Taleban came and took control of the area.”

Just one week ago, the Taleban were engaged in a standoff against the Afghan National Army, ANA, and NATO in Arghandab. The insurgents had mined roads and blown up bridges, and many civilians had left in anticipation of violence.

“When the Taleban came, they told us either to fight alongside them or leave,” said Hajji Hayatullah Aloko, a tribal elder from the village of Loy Tabin in Arghandab. “But we did not want to die in a senseless battle.”

The insurgent presence in Arghandab increased dramatically following a daring prison break on June 13, in which at least 350 Taleban were freed, along with several hundred other inmates.

Within days, there were close to 600 fighters gathered in Arghandab, according to residents.

Many of them, according to Hajji Aloko, were from nearby Pakistan. “They had long hair, and were wearing pakuls,” he told IWPR.

He was referring to the soft woollen cap that was the trademark of the mujaheddin during the 1980s war with the Soviets. While the pakul is quite common in some parts of Afghanistan, the Taleban in the south normally wear turbans. The headgear thus marked the men out as foreigners.

“People were saying the ‘pakulis’ had come,” said Hajji Aloko. “They were from Waziristan and Peshawar – you could tell by their clothing and the way they spoke.”

Kandahar lies close to the border, an almost non-existent dividing line. Afghan officials have long claimed that many of the guerrillas are Pakistan nationals, which Islamabad disputes.

General Gul Agha Naibi, commander of the ANA’s Kandahar Atal Corps, confirmed that there were around 600 Taleban and that most were of Pakistani origin.

Taleban spokesman Qari Yusuf Ahmadi told IWPR, however, that the bulk of the combatants were Afghan.

“There might be some individuals, but there isn’t a massive presence [of foreigners],” he said. “The government just wants to cover up its own failures by saying that.”

For three days, the tension mounted as the Taleban predicted that they would shortly take Kandahar city, and NATO and the government downplayed the threat.

On June 18, NATO moved into Arghandab, and by the following day it was all but over as the Taleban withdrew and the fighting stopped.

Some ANA forces remained in the area to clean up.

“We have not had any problems,” said General Aminullah Patianai who was leading the operation with the Atal Corps.

“For the past two nights, we have faced no resistance from the opposition,” he said, speaking on June 22. “The only difficulty is the mines that were laid, but some teams from Kabul are working on that. We will stay here for a few more days.”

The Taleban deny that their hasty exit from Arghandab was a sign of weakness. Spokesman Qari Yusuf insisted that it was instead a deliberate ploy.

“Our appearing in Arghandab was a tactic,” he said. “So was our departure. First, we showed the world that we can go wherever we want, that we can have a presence wherever we want. Second, we distracted the attention of the authorities from the escapees. We got them out of prison, but we needed to get them safe passage out of the area, and the foreigners were patrolling with their planes. They had the city surrounded, and we just wanted to focus their attention on Arghandab.”

According to Brigadier-General Denis Thompson, Commander of Canada’s Joint Task Force Afghanistan, the ANA bore the brunt of the attack while NATO provided support.

That the ensuing victory was swift and relatively easy seemed to increase the prestige of the Afghan forces, especially among civilians returning to their homes.

“I am so grateful to the Afghan National Army,” said Mohammad Seddiq from the village of Munare. “They cleared the way for us to live again.”

Noor Mohammad, an elderly man from the village of Naga Khan, told IWPR that farmers had been more than willing to cooperate with Afghan government forces.

“I don’t think there were any casualties,” he said. “For one thing, most people had left their homes, and for another, everyone was eager to get back. It is almost harvest season, so everyone helped the ANA.”

Arghandab is famed for its fruit, especially grapes and pomegranates.

According to Afghan government and NATO sources, the Taleban suffered high casualties in the fighting. Estimates run from less than a dozen to several hundred, depending on who is giving the figures. NATO indicated that 50 to 60 Taleban were killed.

“We killed more than 100 Taleban in Munare village alone,” said ANA commander General Abdul Samad, as he gestured at dead bodies lying next to canals and gardens.

In fact, according to General Naibi, much of the Taleban’s “shadow government” for Kandahar was wiped out in the operation.

“It was a serious blow to the opposition,” he told reporters at Kandahar air base on June 23. “Many important Taleban were killed. There was Mullah Abdul Shukur, the Taleban governor of Kandahar; Mullah Kamran, the chief of police; Mullah Baaz Mohammad, chief of intelligence; Mullah Sayed Wali, head of the bank, Mullah Qader, commander of the air force, and Mullah Mohib, commander from Spin Boldak.”

Mullah Shukur’s son buried him along with 14 others in Khakrez on June 22, Naibi added.

“There were more than 100 Taleban killed in each village,” he said. “We captured 12 villages, so the number of fighters killed is in the hundreds.”

The governor said that the bodies of the Taleban would be handed over to Hajji Agha Lalai of the Peace and Stabilisation Programme, so that they could be given to their relatives for burial.

“They will be buried according to Islamic and humanitarian principles,” said the governor.

Hajji Agha Lalai told IWPR that he had already received phone calls from people in Khakrez, Shah Wali Kot, Maiwand, Panjwai and Zherai – all districts of Kandahar province – asking for the return of local men killed in the battle while fighting for the Taleban.

“They wouldn’t exactly say that those killed were members of their families,” he told IWPR. “They just said the dead were residents of their villages.”

This suggests that not all – perhaps not even most – of the armed men who appeared in Arghandab were of Pakistani origin, as local residents had claimed.

A subsequent statement by General Naibi that the insurgents who fled after the battle for Arghandab would be hard to spot as they looked like locals.

“They went to Khakrez, Shah Wali Kot, Panjwai, Spin Boldak, Arghastan, and Maruf districts,” he said. All these areas are in Kandahar province.

“It is very hard to identify the fighters who have fled, since they’re the same as the local people.”

The Taleban spokesman dismissed the government’s casualty figures as “absolutely untrue” and told IWPR that “ten to 15 of our friends were martyred”.

According to Naibi, three ANA soldiers were injured and none were killed in the fighting. He also said no civilians had been hurt, nor had homes and gardens been damaged.

But he indicated that Arghandab remained unsettled.

“There are still ANA forces in Arghandab,” he said. “They will stay there as long as they are needed.”

Abaceen Nasimi is an IWPR journalist in Kabul. IWPR freelancers in Kandahar also contributed to this report.