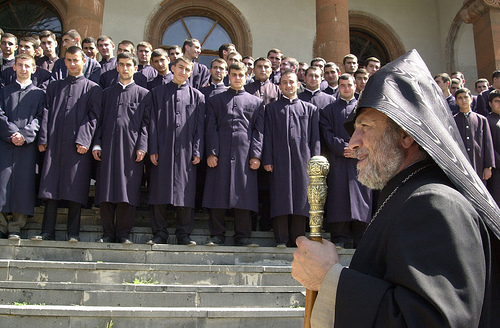 Schools promote main Christian church to the detriment of other religions, critics say.
By Gayane Mkrtchyan 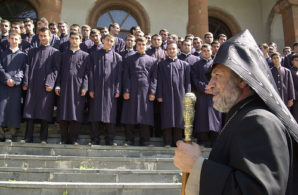 Mahine Sahakyan’s 14-year-old son Arman has learned to keep quiet during some lessons at his school in Armenia. Like his parents, he is part of the evangelical Word of Life church. That should not be a problem, since Armenian schools are under a constitutional obligation to be secular.

But his parents are among the followers of minority religions who complain that lessons teaching the history of the traditional Apostolic Church are used to promote that faith and denigrate others. That places Arman in a very uncomfortable position.

“One priest even asked the children whether there any of their parents went to religious meetings and took them along with them,” his mother Mahine said. “If so, then the church would try to stop it. My son just sat there and shut up to avoid any unnecessary conversations, because he knows that we follow a different church and that we do things differently at home.”

Armenian schools have taught pupils the history of the country’s Apostolic Church since 2002. Officials and priests insist the subject-matter merely reflects the central role the church has played in maintaining Armenian identity since 301 AD, when the nation became the first to adopt Christianity.

In 2005, the history of religion became compulsory for children over the age of nine. Two years later, the church gained the right to design the educational programme and to nominate teachers. That same year, the Centre for Christian Instruction in Etchmiadzin, the seat of the Apostolic Church, took over control of the syllabus.

The director’s centre Varadan Navasardyan denied that the teaching promoted any one religion.

“The school course provides information about how the church, throughout history, has played an important role in the life of our nation and our land, and how every child should know this,” he said. “It was a flaw in the Soviet system that the church was removed from the history syllabus.”

Armenia’s constitution accords the Apostolic Church a special role in preserving national identity and developing spiritual values, and Education Minister Armen Ashotyan has said repeatedly that church and state work together to advance the moral education of children.

Education experts, however, say that the course is in violation of the OSCE’s Toledo Principles, which require religion to be taught according to the principles of basic human rights.

“The teaching of this subject is accompanied by the propagation of intolerance against other religions, even though the law on religion bans religious propaganda given that this violates the principles of democracy,” said Hovhannes Hovhannisyan, an expert on religion at Yerevan State University.

Emil Sargsyan, a member of the Evangelical Church, says his 16-year old son Edgar has regularly clashed with priests who come to the school to teach the history of the Apostolic Church.

“Edgar refused to accept the ideas included in the subject. As a result, a priest came to the school to persuade my son that the church’s ideas were right,” he said. “But when my son continued to insist on his own point of view, the teacher said in front of the whole class that he was a member of a sect. She was imposing her own ideas even though people are supposed to be free to choose for themselves.”

Armen Lusyan, spokesman for the Word of Life church, said he knew of many similar examples.

“The problem arises when deceitful teachers exploit the teaching in order to sow hatred and intolerance towards other faith groups, to stage witch-hunts in class, to condemn the faiths of some pupils in front of their classmates, and to try to get them back onto the so-called true path,” he said.

“Sadly, we have seen cases of this kind, and that’s intolerable,” Lusyan continued. “Children in school should not be pressured or humiliated in any way.”

Armine Davtyan, a teacher who has written a book on religious education, said this meant that the constitutional requirement for secular schooling was regularly being flouted.

“The year-ten textbook is permeated with the idea that if you’re Armenian you must be a member of the Apostolic Church, and that if you don’t accept that, you aren’t Armenian,” she said.

Navasardyan denied that schools were conflating Armenian identity with the church.

“Let them study the subject first, and then later decide what religion they belong to,” he said. “If you study Islam and want to become a Muslim, then go ahead – but you still have to know about your own church and the role it played in the past of your own father and grandfather.”

The Toledo Principles state that governments must be in charge of training religious studies teachers, and must also oversee the appointment process. Although Armenian law says state and church should do this together, in reality the church does it on its own.

Yerevan university academic Hovhannes Hovhannisyan said he had spoken to head teachers at several schools and to representatives of various religious groups, and had uncovered a whole series of problems.

“A shortage of teachers means that the subject is being taught by people who aren’t religious specialists. The textbooks are very densely put together, and even university students would struggle to study them,” he said.

Education ministry official Narine Hovhannisyan conceded that there had been problems ten years ago, but these days the courses were taught by theology graduates from Yerevan State University. She insisted that the textbooks included information on all major religions, and would be simplified this year.

“Of course the history of the Armenian religion is laid out in detail, but it doesn’t say, ‘Child, you must follow this faith’. Are they really not supposed to know about the role the church has played in their history?” she asked.

Teacher Davtyan said Armenia would do well to follow the example of Russia, which in 2009 dropped a school course on the history of the Orthodox Church, and replaced it with a subject called “culture and history of religion”.

Navasardyan, from the Etchmiadzin teaching centre, countered that this example was not transferable, since Russia had numerous minorities following other religions, whereas more than 90 per cent of Armenians belonged to the Apostolic Church.

Gayane Mkrtchyan is a reporter for ArmeniaNow.com.

Filed under: News, Politics
Share Tweet Pin G Plus Email
previous article: Be different! Post video resume! Get dream job
next article: A Woman Who Was Declared Dead By Doctor’s Was Found To Be Alive