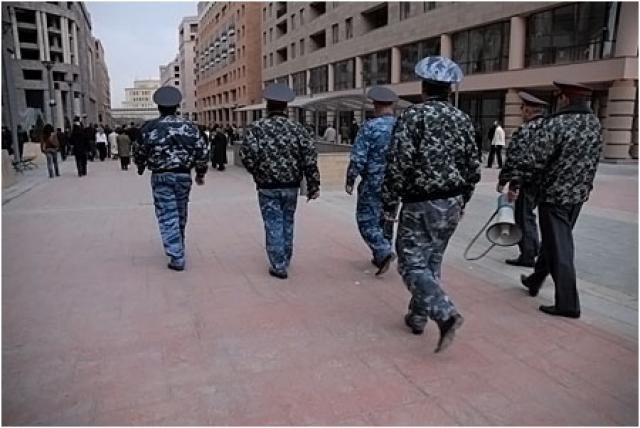 Despite amendments to the law on public marches, rallies and demonstrations following the recently lifted state of emergency in Armenia, the opposition continues to hold meetings on the streets of the capital, Yerevan. In order to circumvent the restrictions, the gatherings attended by less than 100 people are held under the guise of playing chess, reading books or even eating fast food in public.

Human Rights Watch has already lambasted the governmental measure and Unzipped welcomes the action by opposition supporters. Most of the demonstrators support the former president, Levon Ter-Petrossian, who claims victory in the disputed 19 February presidential election in Armenia.

Announcement on “daily walks”, or “political walks”, or “popular walks”, as some may call it, came out on Sunday, 23 March 2008. Since then “daily walks” around Liberty sq – which is ‘sieged’ by police – are being organized as an act of defiance against the limitations of civil liberties imposed by Armenian government.

Khirimian’s Thought, however, says it can understand why such a measure was introduced and argues that it is necessary in the context of violent clashes between the security forces and opposition on 1 March and what the government sees as continuing attempts to stage a “colored revolution” in Armenia.

By no means am I justifying the government’s strategy toward establishing political stability through public and civil restrictions, however, I can see the necessity to do so in order to avoid further bloodshed and unrest. […] It is blatantly obvious that if demonstrations are allowed to continue, whether they have legitimate basis or not, LTP will take advantage of the emotions and pure intentions of the Armenian people and will continue advocating for the systematic elimination of the current government, also creating the opportunity for further violence to emerge.

Indeed, in a translation of an article published on a samizdat blog, a fugitive opposition leader, newspaper editor Nikol Pashinian, says that such actions will force the government to act in even more repressive ways, thus precipitating their downfall. Pashinian likens the process to tightening a bolt too much.

And so, what do we need to do, my fellow citizens of Armenia? We must not allow the pair an exit out of this process of “tightening the bolts,” because as long as you are tightening the bolts, you can’t drive the car. Moreover, bolts have a tendency to split, to break. That happens when you tighten them beyond the degree to which they can be tightened. The Serjo-Kocharianic bolts have arrived at that point, and in order for them to split, it is necessary to force them to continue the business of tightening. How?

Most Important of all, of course, are the daily walks in the vicinity of Freedom Square. This is a fundamental task that we all need to carry out. And the theory might just have proved itself in practice. Even though the demonstrations are small and ostensibly do not threaten public order, my Armenia Election Monitor 2008 carries an account and photographs of the dispersal of one such action by riot police last weekend. Although the police gave around 50 demonstrators two warnings in three hours, there was no violence or clashes, but the sight of riot police in a major Yerevan propaganda is ultimately counterproductive for the authorities.

[A]fter about an hour and a half the police read out the riot act to those gathered on Yerevan’s new Northern Avenue and the riot police moved in. A few women refused to move and lectured the police. A few among the protesters started to whistle and jeer, chanting the name of former president Levon Ter-Petrossian before being quickly told to stop by others among them. Being forced to move down Northern Avenue, one elderly man sitting and holding a lit candle was physically moved from his seat by police. A few days later and the police played directly into the hands of the opposition by mistakingly detaining several passerbys in addition to dozens of pro-Ter-Petrossian activists and political figures. The Armenian Observer comments on the event and posts some videos.

The “political walks” taking place in Yerevan’s Northern Avenue are followed by arrests every day. Today more then a dozen citizens were arrested.

The video [below] shows a woman crying and telling the police, that she had come there with her husband with no “political” intent – just to walk, to which police respond, that there is probably a mistake and they’ll release her husband soon.

[…] The police are not giving any reasons for this pointless measures they are undertaking, which are only designed to completely scare people, but are apparently only serving to make people hate the authorities and police even more (if that is only possible at this point). This is not just appalling, this is plain stupid!

Meanwhile, as of yesterday, the authorities have started to try to disrupt attempts at civil disobedience in other ways. Unzipped posts a photograph and reports that the General Prosecutor has now started to walk on Northern Avenue in what can only be considered an attempt to play the opposition at their own game.

“I born in 1953, and, believe me, I walked in this city more than you,” – justified his presence in the Northern Avenue Aghvan Hovsepyan, A1+ reports. “Why, is walking prohibited? I am going home from work. Don’t I have a right to walk?”

Ironically, that’s exactly the type of questions that hundreds of people, including dozens detained during the “walks” (all later released), ask too.

Yet, regardless of the politics behind the actions and the risk of confrontation still hanging in the air as well as the partisan propaganda disseminated by both sides, Marilisa Lorusso’s Blog says that the demonstrators are ultimately peaceful.

[…] Levon Ter-Petrosyan is losing the battle to keep all opposition’s info media compactly on his side, with some reminding that if you push towards a full frontal confrontation, you cannot complain afterwards for harsh outcomes. And the responsibility for the tremendous suffers of the victims, arrested, shocked persons, of the further loss of credibility of Armenian political system, falls on whoever is acting moved by personal ambition and selfishness. Inside or outside the government.

It all draws quite a mean picture, that doesn’t give justice to the peaceful behavior of that part of the civil society protesting in clever and original ways in Northern Avenue, against the new law on restriction of freedom of assembly.

But with an opposition divided and under detention or on the run, the same blog says that such moves are not effectively threatening a government that appears to be more confident now that the momentum behind large-scale post-election protests has dissipated.

The oppositions gathered together the last days before the 1st of March is annihilated by arrests, with some exceptions, like Ter-Petrosyan, kept in his isolation, still focusing on election results, and the Heritage party, trying to voice against the new law on freedom of assembly and holding peaceful meetings. Such a fragmentation is not providing the chance to draw a united opposition program, to carry on a confrontation with a government that, clearly, is decided to move steadily on.

With the inauguration of president-elect Serge Sargsyan just over a week away, time will tell soon enough.