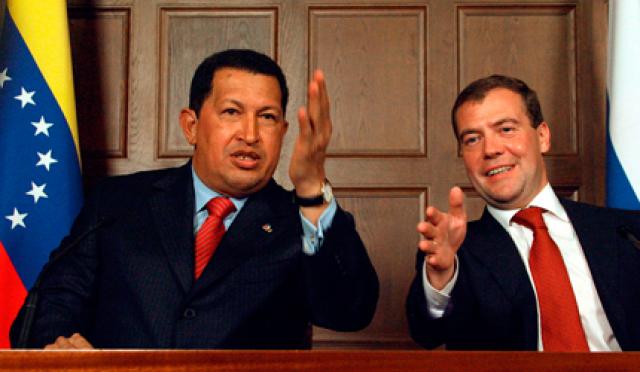 Hoping to create a closer diplomatic and economic collaboration between himself and newly inaugurated president Dmitry Medvedev, Chavez traveled to Moscow to discuss an increased Russian oil presence in Venezuela and to seal a €1.25 billion arms deal for his country.

Moreover, Chavez took the opportunity to promote a more cohesive force against what he sees as an economic and possibly military threat from the United States.

“Russia and Venezuela must become strategic allies in the oil sphere and in military-technical cooperation,” Chavez announced. “This will guarantee the sovereignty of Venezuela because we are now threatened by the United States.”

Chavez followed up that as a part of the oil agreement, Russian armed forces would be welcomed and supported in Venezuela.

While both presidents took pains to note that their visit was strictly a business affair, some observers have become suspicious of what a Russia-Venezuela alliance could mean for the United States.

A U.S. State Department spokesman remarked that developing ties between the two nations had possible implications for “regional stability” in South America.

However, one regional expert remarked that given the U.S. presence in a number of former-Soviet republics, including Georgia, it was hardly surprising for Russia to try to make in-roads in South America.