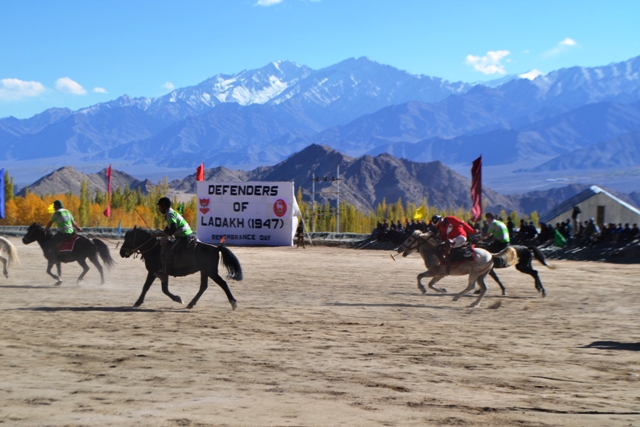 Leh, October 27, (Scoop News)- To commemorate the bravery and courage of the Indian Army and the people of Ladakh in 1947 against the Pakistani raiders, the Fire and Fury Corps celebrated ‘Defenders of Ladakh (1947) : Remembrance Day’ at the newly constructed picturesque Col Sonam Wangchuk, MVC Stadium near Shanti Stupa, Leh.

The celebrations included the conduct of a series of events which commenced with Inter School Competitions from 8th Oct 2014 to 10 Oct 2014 at Ladakh Scouts Regimental Centre, Phyang. Five competitions were conducted which included Football, Volleyball, Handball, Debate and Painting Competition.

After Interschool Competitions, T-20 Cricket Tournament was conducted at the stadium from 15th to 19th Oct 2014. 08 Teams from entire Ladakh Region participated in the tournament.

In a departure from the usual trend, the Chief Guest of the event was neither any office bearer from Military or Civil administration nor any Politician. The Chief Guest and Guests of Honour of the event were those War Veterans and War Heros, who fought against Pakistani raiders in 1947 as part of ‘Nubra Guards’ under the ‘Son of the Soil’ Col Chhewang Rinchen, Maha Vir Chakra* and the 1962 and 1971 wars. 07 such war heroes were present to grace the mementous occasion incl Honorary Lt Sonam Joldan (Chief Guest), Sh Sonam Wangial, Padam Shree, Lance Naik Sonam Stobdan, Lance Naik Mutup Gurmet, Havaldar Punchok Stobdan,VrC, Naik Dorjey Phunchok, VrC and Naik Abdul Rahman, SM.

Various events were conducted during the Grand Finale incl 16 kilometers and 05 kilometers run for both men and women, Pipe band display by Pipe Band of Ladakh Scouts, Cultural Pgme by young and talented students of TCV (SOS) School, melodious “Op Sadbhavana” song by famous singer of Ladakh Mr Phunchok Ladakhi, Tent Pegging and Archery display by civilians and Military riders and archers. The main attraction of the event was finals of Polo match between teams of Drass (A) and Ladakh Scouts (Red). The match was keenly contested, however, riders of Ladakh Scouts proved their mettle as they won with a comfortable margin of 12-01.

At the end, Prize distribution ceremony of all the events was conducted. Lamdon School won the Trophy for Best School in Sports. Various other individual prizes were also given for Painting and debate competitions. In Cricket, Servo Team won the T-20 Cricket tournament Trophy whereas Ladakh Scouts team was the Runner-up Team. In Archery, Luna Team Black, Leh won the Archery Tournament and Contractor (Green) was the Runners-up team. Jigmat Dorjey of Luna Team Black was adjudged as Best Archer of the Tournament. In Tent Pegging, riders of Ladakh Scouts dominated the event by securing first two positions. Besides these prizes, various other prizes were also given to other participants/ winners and officials of the event.

All these events were conducted by Army under ‘Operation Sadbhavana’ to give an impetus to the traditional sports of Ladakh especially Polo and Archery and also to provide a platform to the youth of Ladakh to exhibit their talent. The events were conducted at the newly constructed Col Sonam Wangchuk, Mahavir Chakra stadium. Lieutenant General BS Negi, YSM, SM, VSM**, PhD, GOC ‘Fire & Fury Corps’ stated that the Defenders of Ladakh Remembrance Day celebrations would be held every year.

At the end of the event, Rigzin Spalpar, CEC, Leh felicitated the War Heroes and conveyed his appreciation to the entire ‘Fire & Fury’ Corps and Ladakh Scouts Regimental Centre for the extremely successful conduct of the event and expressed that conduct of more & more such events in future will not only provide a platform for development of talent of Ladakhi people, but will also strengthen the bonding between Army and the people of Ladakh.

On 27 Oct 2014, a memorial service was held at the Leh War Memorial where floral tributes were paid to our brave martyrs by senior officers of Army and the Civil Administration, veteran soldiers, gallantry award winners and Veer Naris. 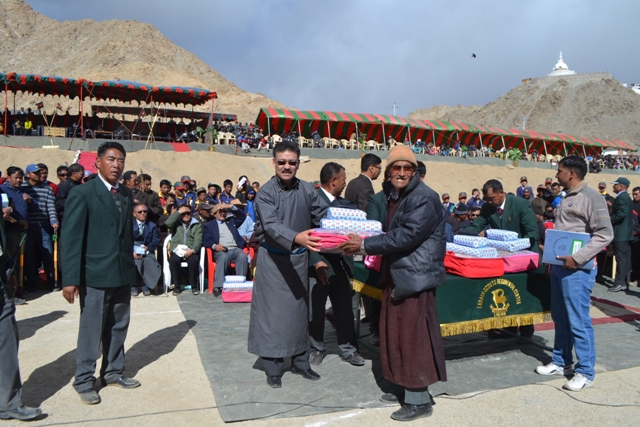