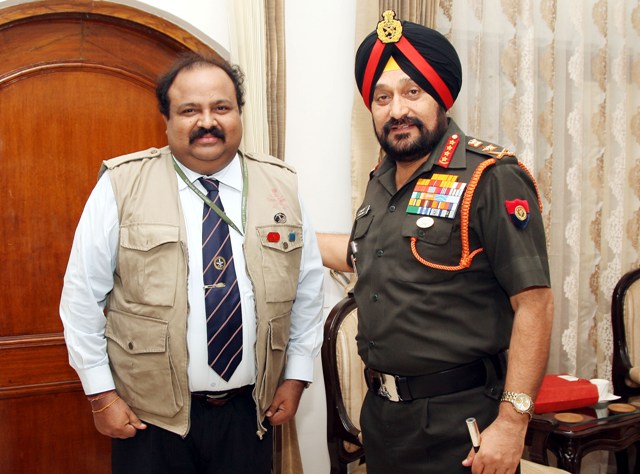 Jammu, July 14,(Scoop News)-The Chief of Army Staff, General Bikram Singh during his visit to Satwari Cantonment decorated Mr Shib Narayan Acharya, Photographic Officer of Public Relations Office (PRO), Jammu with COAS Commendation Card and Badge on the spot for the selfless dedication to the country and his professional work retendered to the organization at Jammu Garrison on Monday.

The Chief also applauded the yeomen services of all the staff of PRO (Defence) Jammu under the able guidance of Lt. Colonel Manish Mehta,the defence PRO.

The Chief also complimented Mr Acharya towards projection of positive images of the troops deployed in Northern Command & Western Command through his photo journalism & mass media.

The officer who is a National Award Winner to project the Army’s Green Initiative at Siachen Glacier, has earlier been decorated with Vice Chief of Army Staff Commendation Card, Northern Army Commanders Commendation Card and Vice Chief of Air Staff’s Appreciation for his outstanding contribution in Defence Photojournalism, Media and PR Field in the Counter Insurgency and Counter Terrorism scenario of J&K.

He also brought laurels for Directorate of Public Relations of MoD.
READ MORE AT http://scoopnews.in/det.aspx?q=39258