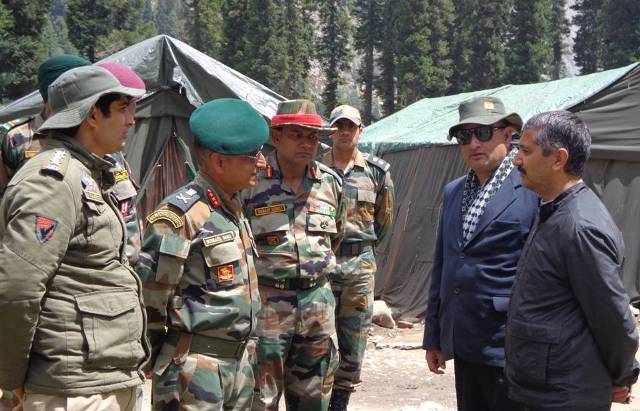 Srinagar, July 19, (Scoop News)- Lt Gen Subrata Saha, Chinar Corps Commander today visited Baltal, Domel and Pahalgam to review the security situation pertaining to Sri Amarnathji Yatra. He was briefed by the Sector Commanders, Brigadier Kular and Brigadier Sood incharge of both the routes, on the security environment. Consequent to the violent altercation between Bhandara wallas, Tent and Pony owners yesterday, locals and innocent Yatri’s approached the Army troops who were deployed in close vicinity for assistance.
The Chinar Corps Commander said that the Army is committed to provide environmental security to people and Yatri’s during the Sri Amarnathji Yatra.He expressed confidence on the security arrangements in place and hoped that such an incident would not get repeated. The Shri Amarnathji Yatra has since resumed from this morning.

Defence spokesperson said that the Army troops responded immediately on humanitarian grounds and moved the stranded people to the Army Camps. In Domel approximately 1500 and in Sonamarg 250 Yatri’s were accommodated & provided shelter, food & other essential administrative needs. Their safety and comfort was ensured.

Touched by the swift response and personal care shown by the Army troops Sudhir Kumar, of Village Sikria Mohalla, Batala, Punjab said “I was amazed to see that troops organized food for more than 1000 people who had taken shelter in their camp area. We owe our lives to the Indian Army’’. Arun Kumar, R/O Bhiwani Shantilok, Haryana said ‘’ True to my expectations, Army personnel guided us to safety into their camp. They also ensured no miscreants were able to cross the Baltal Bridge towards Domel side. They reunited me with two of my family members who went missing. I also saw the Army bringing large number of people to safety and even feeding them. I am proud that we have such a dedicated and fearless Army serving us’’.
READ MORE http://scoopnews.in/det.aspx?q=39379