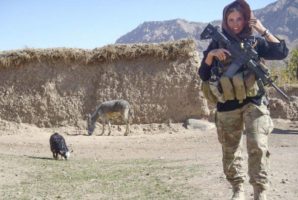 Amy Washburn portrayed as sex symbol in Afghanistan. Is this a violation of DOD guidance which stresses cultural awareness and respect for Pushtu culture?  Others insist that such photo ops help promote the war in Afghanistan?

Many of you may be familiar with a picture making its round on facebook and social media of a .U.S. soldier in Afghanistan by the name of Amy Washburn.

Amy Washburn was a former Philadelphia Eagles cheerleader who shook her butt and jingled her boobs at audiences during football games while she was studying history at Drexel University.

She was also in Army ROTC at the time and she is currently an Army intelligence officer in Afghanistan.

Now a picture of her has surfaced, which has since gone viral shows her with weapon in hand wearing a head veil. At the same time you can clearly see she is wearing makeup in Afghanistan?

Question: Why are female soldiers trying to look sexy on the battlefield?

According to reports she served as part of a “special mission” to relate to local Muslim women in ways that would be culturally “inappropriate for male troops” – whatever that means exactly? Source: http://undertheradar.military.com/2013/12/from-nfl-cheerleader-to-army-intelligence-officer/#ixzz2oV7zHxA2 ).

The concern is that she is setting a bad example in the process, and endangering the mission in Afghanistan by her very presence and actions. I mean why is there a need for female soldiers in Afghanistan to wear make up for in the first place. The last place you want to look sexy is a battlefield.

Everyone with any common sense knows there is a fatwa (or religious edict) against women wearing makeup in Afghanistan. By Washburn wearing makeup – she flaunts that edict!

The fatwa threatened women with “punishments” if they did not comply with the new rules and threatened violence if disobeyed: “If officials do react to our demands, we will start a jihad,” Reuters cited the edict as saying.  Source: http://www.globalpost.com/dispatch/news/regions/asia-pacific/afghanistan/130722/fatwa-prohibits-afghan-women-wearing-make-says

You have a situation in Afghanistan where if your a woman you can have your face ripped off or mutilated by wearing make up. Now you have female soldiers walking around engaging Afghan civilians wearing make up? It really doesn’t make much sense. Neither does having women serve in a combat zone anyway.

U.S. female soldier engagement will “offend most Pashtun men…” says an Afghan National Army colonel who cautions against such a thing. He is particularly concerned by American women in the U.S. Military who wear makeup and perfume  interacting with Afghan men and women.

“Awareness of the culture(s) of the Afghans in the area of operations is vitally important to commanders as they develop and implement plans to conduct both lethal and non-lethal operations in the counterinsurgency (COIN) environment of Operation Enduring Freedom (OEF). Commanders need to know and understand the diverse Afghan culture of the local population in order to win the support of that local population. To achieve cultural awareness, commanders have several tools available. These include patrolling, key leader engagements (KLEs), female engagement teams (FETs), human terrain teams (HTTs), and other interactions with the local population” (see DOD guidance http://usacac.army.mil/cac2/call/docs/10-64/ch_3.asp).