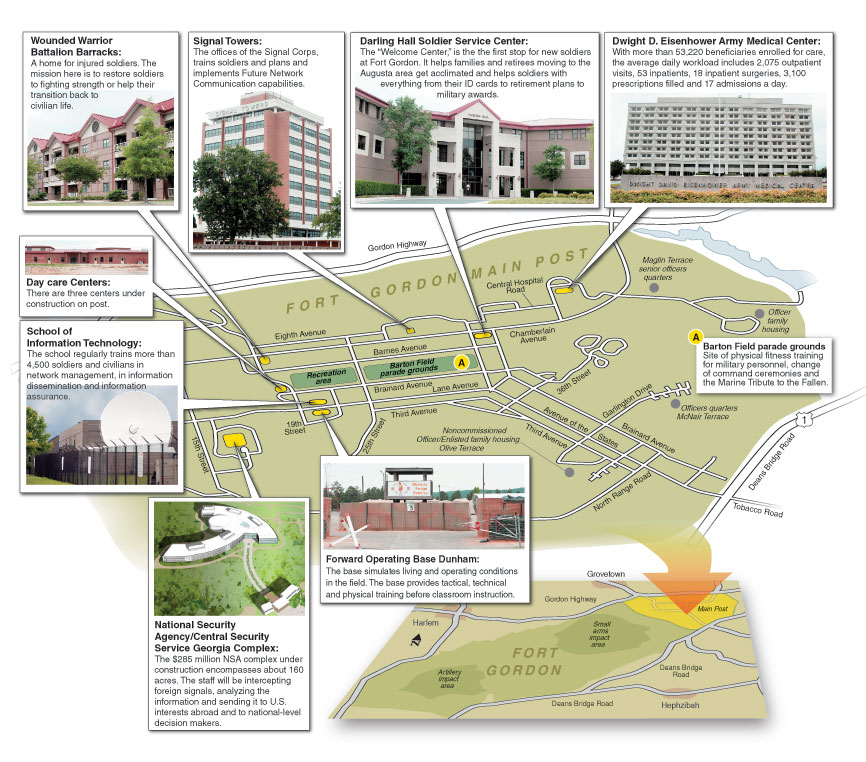 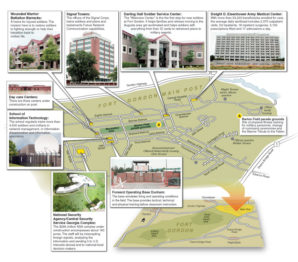 Ft. Gordon is plagued by security vulnerability and problems, including serious breaches of security. In one case a man impersonated an Army officer and stole military explosives.  The base is also beset with problems in terms of power reliability and supply problems – this doesn’t bode well for Army Cyber command and its thousands of computers systems. Pictured here: Base map of Ft. Gordon indicating major building locations.

It is the first time in history the Army is consolidating and coordinating Army cyber and network operations under one commander.

Some question this decision as ill advised as Ft. Gordon has been plagued by security breaches recently, including a man arrested with explosives in his car while impersonating an Army officer.

This same man breached security at the base on numerous occasions. Ft Gordon is also plagued by thefts and robberies and has had problems in the past with civilian contractors accessing restricted areas.

In addition Ft Gordon is currently home to a National Security Agency facility already, which is another concern. Having multiple high value targets in one location is not a good idea, some say.

Ft. Gordon is also a continuing target of foreign spies already believed to be targeting the NSA facility there. There are currently approx. 30,000 individual from various branches, as well as govt contractors who work there – many are believed to have not been adequately vetted in terms of proper security clearances. A situation the Army has refused to comment on.

Fort Gordon is the home of the Signal Corps and TRADOC. One hundred and fifty miles east of Atlanta. Fort Gordon covers approximately 87 square miles (that can be accessed at multiple unsecured points) and serves a population of 61,519 – as such you have a constant flow of people in an out of the facility.

Ft. Gordon has been described as a security nightmare by professional who look at numerous ways the base is unsecured or otherwise vulnerable to being infiltrated or attacked.

Ft. Gordon also has significant problems in terms of power outages – indicating substantial vulnerability there in terms of reliability and operation  (see: http://www.gordon.army.mil/NEWS/power_outage/ and http://www.ftgordonsignal.com/news/2013-12-20/Community_Events/Installation_power_outage_damages_not_claimable.html).

Officials say the mot recent power outage situation is linked to an “equipment issues” – a situation that really hasn’t been address by the military in any substantial way. We can imagine this is not good in terms of the Army cyber command being located there, before addressing power reliability issues which has caused all sorts of problems at the base already.

Despite these and many other very serious security concerns the Army decision is final in this case.

What follows is the official DOD news release:

“Cyber threats are real, sophisticated, growing, and evolving,” said ARCYBER’s commanding general, Lt. Gen. Edward C. Cardon.  “The Army’s decision demonstrates support for unity of command and the importance of cyber to our Army and our nation,” he explained.
The Army selected Fort Gordon as the permanent location for ARCYBER Headquarters for operational and cost reasons. Since its establishment in 2010, ARCYBER has been temporarily split-located in seven government buildings and leased space across the national capital region. The move to Fort Gordon will co-locate ARCYBER Headquarters with the Army’s Joint Forces Headquarters-Cyber and NSA-Georgia, placing the Army’s operational cyber headquarters with the majority its cyber mission forces.  It will require 150 fewer personnel than other potential sites, as well as reduce military construction requirements and costs by 23 percent less than other considered options.
Establishing the Army Cyber Center of Excellence at Fort Gordon will begin by aligning Army cyber proponency within the U.S. Army Training and Doctrine Command, creating institutional unity and a focal point for cyber doctrine and capabilities development, training and innovation.
Before selecting Fort Gordon, the Army evaluated its ability to support U.S. Cyber Command-directed missions and other operational factors such as installation capacity, environmental impacts, and human resource considerations. Community input was also solicited and considered through an environmental assessment public comment period conducted in the fall.
ARCYBER will continue to have a command liaison element co-located with U.S. Cyber Command at Fort George G. Meade, Md.”
Source: DOD http://www.defense.gov/releases/release.aspx?releaseid=16440
For more information, please contact Army Cyber Command Public Affairs: Jennifer Downing at 703-428-6396; or Army Public Affairs: Lt. Col. Donald E. Peters at 703-697-7550 or Wayne Hall at 703-693-7589.
Additional information about ARCYBER is available at the command website: http://www.arcyber.army.mil/
See related article dealing with security breach at Ft. Gordon: Keysville man charged in Ft. Gordon Incident http://www.wjbf.com/story/21682393/keysville-man-charged-in-fort-gordon-incident and http://www.wjbf.com/story/21695852/fort-gordon-explosives-theft-suspect-heading-to-court-in-january
Filed under: Military, News
Share Tweet Pin G Plus Email
previous article: Omar underlines importance of sports
next article: Div Com reviews preparedness for snowfall