Around 15 persons including members of the same family have died due to the floods and land slides occurred in several parts of the country since yesterday (01)as a result of the current adverse weather conditions the Disaster Management Center (DMC) has announced.

Out of the 15 deaths reported 12 are from the Kalutara District(Western Province) and among them were father and two children from the same family DMC said.Three deaths were reported from Colombo and Matara Districts (Southern Province)
.In Colombo a couple reside in Malabe Area have died when a wall of their house collapsed this morning.in Matara District two youths are reported as missing due to the adverse weather conditions.

The authorities have disconnected the Power Supply for the most parts of Kalutara District in view of the safety of those who trapped in flood waters out there it has been reported.

Heavy Showers accompanied by thunder,lightning and gusty winds prevails in most parts of the country for second consecutive day today while roads ,bus and railway stations and houses in some places remains under water the Disaster Management Center has said. 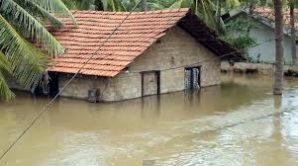