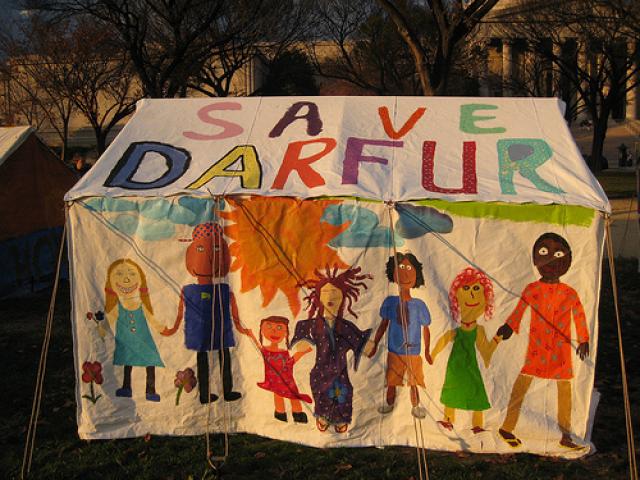 The International Criminal Court issued arrest warrant Wednesday for Sudanese President Omar al-Bashir making him the first sitting head of state to be charged with war crimes and crimes against humanity. The charges are based on the conflict in Darfur. In this post, we are taking a look at opinions and thoughts of Sudanese bloggers. Some bloggers have taken the “wait and see” approach while some argue that past experiences show that nothing will really happen. “You dance and loudly talk…just talk and talk….,” writes Ras Babi. One blogger notes that Omar al-Bashir will not be forcibly arrested by Western governments and therefore if “he stays home” he will be safe. Another one waits for the “entertainment” to begin.

Mimz asks people living in Sudan to stop panicking because “the most likely scenario in my opinion, nothing happens!” and “Egypt doesn’t need any more people crowding it.”

Either the country is turned upside down, or all our problems are dissolved (hiiiiighly unlikely) or, the most likely scenario in my opinion, nothing happens!
So please, Sudanese citizens, those of you living in Sudan… stop panicking! And stop packing your bags! I know so many people who are actually gone by now because they are afraid of what might happen if the warrant is issued. I’m telling you, Egypt doesn’t need any more people crowding it!

Nothing is going to happen, and no I am not in denial, I am just thinking of the most reasonable sequence of events. You will not be attacked in your own home, you will not lose all your valuable posessions and you will not find a loved one dead outside your house. Don’t be so overdramatic!

Sudanese Thinker starts an open thread to discuss the ICC decision. He finishes his post saying, “Let the entertainment begin”:

Dear fellow Sudanese bloggers, drop a link to your own blog post on the matter in the comments section so that it will get noticed by the media. I’ve got a number of journalists emailing me, and they’re all interested in hearing what we Sudanese bloggers have to say about this.
Everyone else, share your thoughts, if any. This is potentially history in the making. Meanwhile, I’m gonna go find me some pop-corn.
Let the “entertainment” begin!

Sudanese Optimist simply says, “I wonder…why did John Garang have to die?”

Dying In the Dust begins his post wondering if this could be the beginning of the end. The blogger thinks that al-Bashir will be safe “as long as he stays home”:

Could this be the beginning of the end? Today, the International Criminal Court at the Hague issued an arrest warrant for Sudanese President Omar Hassan al-Bashir for a five-year campaign of violence in Darfur. This is the first time a sitting head of state is charged for war crimes under this international tribunal.

It will be very interesting to see how this plays out in the world, in Sudan and especially, in the villages of Darfur. Here are two initial questions I have:
*Will it be enough? It’s only a warrant for an arrest and Sudan is not likely to simply hand over their head of state. No Western government will support going in an forcibly removing Bashir – so as long as he stays home, he is probably safe. However, will the international pressure and bad publicity drive Bashir to reform his ways? I want to say yes for the sake of my friends and their families who are suffering, but history doesn’t support hope in this case.
*Will Darfur get a backlash? How will Bashir and tribes loyal to him respond? I know they will lash out against the ICC and Western “colonial” powers – but I worry that there will also be retaliation against the men, women and children of Darfur in the form of even greater violence and suffering. The UN is already warning its people to be extra careful in the next few days. Can the AU troops protect the millions of refugees?

Ras Babis expresses his thoughts in a poem in which he says that he does not believe in international laws and that “…when it comes to a man like alBashir/you dance and loudly talk/no action/no justice/just talk and talk/for the Sudanese….” He begins his poem quoting al-Bashir telling the ICC to eat his arrest warrant:

Omar alBashir says
ICC can eat his arrest warrant
he smiled and danced
thousands of his supporters with him
he said the warrant does not
worth the ink it was written with
………
Do you remember Sudan…
how your generals with support of al-Turabi
hanged a great master in your land?
Mohmoud Mohamed Taha was a master
Oh Sudan
Oh my beautiful Sudan
thousands of differences are there between
a master and a killer
….
in this world we live in and on of contraditions and injustice
it is easy to judge a simple man
a real hero
or anyone of us
the laws are made to control the masses
and protect the powerful ones
I became a no believer
I do not believe in your international laws
….
who killed Che Guevara?
who killed Lumumba?
and who killed Taha?
it was you international law
that is why
when it comes to a man like alBashir
you dance and loudly talk
no action
no justice
just talk and talk
for the Sudanese….

Kizzie, who wrote his post before the ICC announcement, reveals that Bashir’s party is divided over the issue:

Some Sudan “experts” forsee a bigger Sudanese crises, the disintegration of the Sudanese state. Andrew Natsios, former US envoy to Sudan is worried about a Somali-like situation with an Afghanistan-like intervention.

African and Arab leaders are standing together against the ICC’s decision. When the arrest warrant is issued, they are going to be very silent. Bashir’s party is already divided. Most of his advisors asked him to step down. He wouldn’t.

This article was originally posted by Ndesanjo Macha on Global Voices.

Filed under: World
Share Tweet Pin G Plus Email
previous article: What Should the International Community do in Gaza?
next article: Limor Schafman on What Makes a Successful Startup