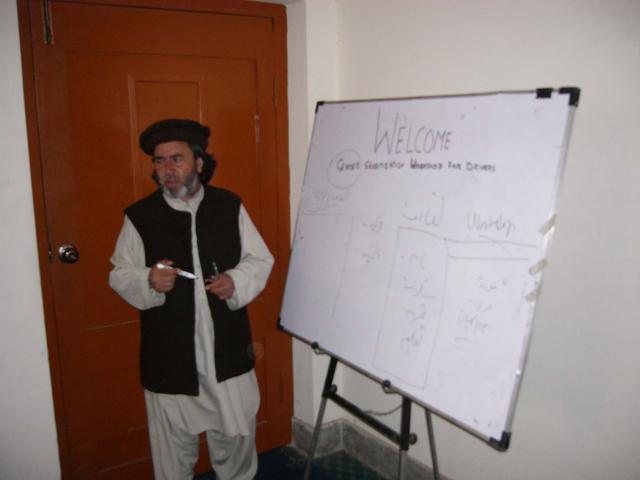 CHITRAL:  A one day training workshop on Gender Awareness & Sensitization for drivers of Chitral was held here at AKRSP main office. Training was organized by Shabnam Ara Training Coordinator of Aga Khan Rural Support Program Chitral. The program was started with the recitation from the Holy Quran. Hussain Ahmad institutional Development Officer explored aim and objectives of the training. He said that drivers perform very sensitive duty and women folk often pick and drop by them who trusting upon them. He said main purpose of the training is to train drivers of the district how to deal and treat with women folk with a very civilized and moral way.

Professor Abdul Jalil explain different aspects on Islamic point of view and stressed upon the participants to keep regard and respect each other especially women folk who trust upon them and sometimes they are being pick and drop alone by them. Niaz A Niazi Advocate president Legal Aid Forum for Human Rights Chitral highlighted legal and constitutional contexts and stressed upon the participants to not violate human rights for keeping a peaceful atmosphere in the district. Shabnam Ara training coordinator said that we conducted this training for drivers of Chitral only to create awareness among them about gender and to train them how to deal and treat with women folk who are usually their commuters. Fazal Karim Manager Administration AKRSP highlighted international human rights charter and declared that United Nation Human Rights Charter as well as Islamic Human rights charter not conflicting in basic human rights. He said Islam has introduced human rights some 1400 years ago.

Getting feedback from the participants they highly appreciated this step of AKRSP organizing training on gender sensitization and demanded to continue it in future. On completion of one day training workshop the chief guest distributed certificates among the participants. They also posed for a group photo and the program was concluded successfully.