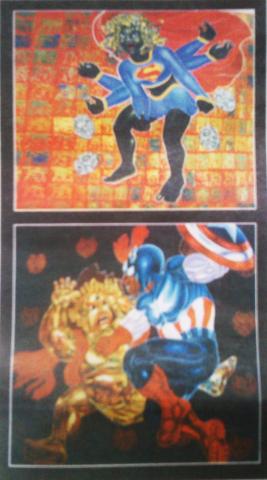 Art can be a form of expression but when an artist’s questions the beliefs and values in the name of FREEDOM of EXPRESSION then the question of morals and ethics come up front. Likes such one of the artist in Nepal has been threatened of his life for his ultra modern fusion painting of Hindu deities and Super Heroes of the west.   Manish Harijan, the painter has been questioned with his art and meanings; he was called upon by the administrative body of the government for a statement against his art exhibition when the Hindu federation started protest against the exhibition. The Siddhartha art gallery where the exhibition was going on has been sealed by the Central District Office. The case came upfront when the artist was directly threatened of being killed for his art work.

Manish Harijan, said, “People have misunderstood my art. With every painting there is a caption symbolizing a certain meaning and if it’s read then you will know the true meaning of the art and I have not made fun of the culture or tradition. I have just tried to express and adapted the art to a newer level or the new generation style. As currently the new generations are overlooking the values and tradition so this was just an effort to bring it in their notice, other than that I have no other objective. ”


According to the Hindu Federation, “This is a mockery of our culture; there is a thin line in between expression and making fun of something. This is ridiculous in comparing our gods and cultural values in the name of modernism. Our culture is our respect and it cannot be made fun of or compared to westernization.”