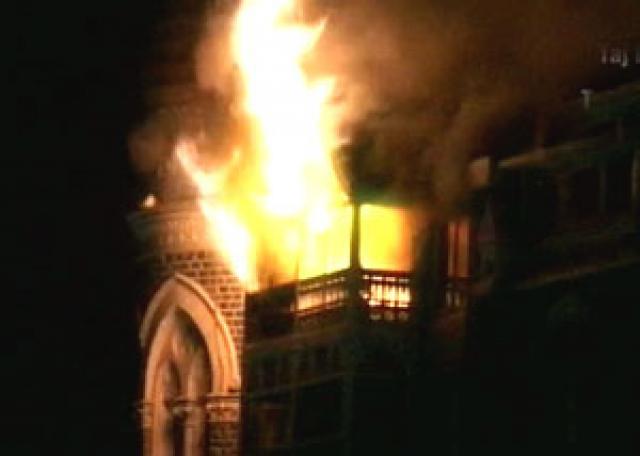 The mascot of India’s growing wealth and prosperity and the landmark that set Mumbai’s skyline apart – the Taj Mahal hotel at the Gateway of India- burned in front of our eyes.

Flames engulfed its imposing dome, that’s been the background of many a tourists’ pictures and stories on India. In what’s set to be one of the worst terrorist attacks on Indian soil, the night of 26th November, proved to be like a 9/11 for the nation.

The fire spread quickly across the heritage corridor of the Taj Mahal hotel, traditionally large and wide, with a long winding staircase. The center of the dome crumbled as we saw smoke clouds rise about the dome. Suddenly the glow of the flames gave way to dust clouds, splinters and pieces of concrete that blew, every few minutes from the dome’s top. The orange of the fire soon turned into grey clouds against a pitch dark sky.

We watched, we helped, we reached out and we reported as people climbed down in tears. As the ladders went up, there was hope but there was fear about what was really going on inside. We as journalists watched from behind the media vans, zooming in hard, to reach out to every detail.

In the glow of the fire, people in rooms were clinging on to curtains, some on the phones with family, some screaming for help but many were heard by the firemen.

The engines doused the fire, but the flames continued to fan toward the inside of the building, collapsing the structure on the top floors.

The Taj Mahal hotel was burning. Terrorists had taken over the building, holding many hostage. As they moved from corridor to corridor, they turned the heritage tower into a fragile shell.

The Taj Mahal Palace hotel resort was commissioned by Jamsetji Tata and first opened its doors to guests on December 16, 1903. In this 105 years, Taj became the symbol of the city, first as a tourist attraction and then as the epicenter of the commercial capital.

It’s prestigious and exclusive club, The Chambers, promised corporates and bureaucrats, privacy and privilege. Taj Mahal, was where anyone in business, was meant to be.

Filed under: Politics, World
Share Tweet Pin G Plus Email
previous article: Another Indian student killed in US
next article: Feed the brain