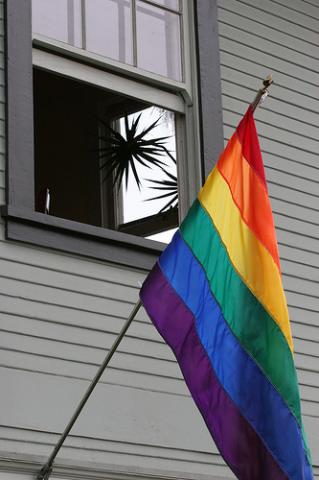 The anti-gay pseudo-Christians of the American Family Association are at it once again.  This time, they’re going after Procter & Gamble because of a scene from the soap opera "As The World Turns" (which the AFA states is wholly owned by P&G), in which two guys kiss each other.  Here’s a link to the page describing it, followed by their description of what happened: http://www.afa.net/Petitions/Issuedetail.asp?id=316

"Procter & Gamble has resumed using explicit, open-mouth homosexual kissing in their soap opera, "As the World Turns." P&G decided to include this type of content as a commitment to "diversity." P&G stopped showing such scenes some months ago, but has now decided to again help promote the homosexual agenda which includes homosexual marriage.

Gay activists are hopeful that the P&G effort will desensitize viewers to the homosexual lifestyle and help make the unhealthy and immoral lifestyle more acceptable to society, especially to children and youth."

The site also includes a video of the scene.  I watched it, and quite frankly I was disappointed.  The AFA stated, in bold letters "WARNING – content is repulsive."  I watched it, and as a straight man, I said, "Wow, that was it?"  It wasn’t repulsive…it was actually quite pathetic.  To call that a real open-mouth kiss is an insult to open-mouth kisses everywhere, be they homosexual or heterosexual.  I’ve been to house parties in which I’ve seen gay couples (male and female) playing tonsil hockey as if the game was in overtime.  Those were open-mouth kisses.  This was more of a prolonged pecking series.  There was only one instance in the video where their mouths were open during the event, and I didn’t even see any tongue.  They looked like they were trying to breathe.

I know what you might be thinking: "Hmm…he seems to be unusually interested in talking about a scene with two guys kissing, yet he says he’s straight."  The reason why I’m describing this is to show the AFA’s utter ridiculousness in their reactions (plus I don’t have class today and have little else to do aside from wail on my favorite target).  A less-than-one-minute-long scene with 2 guys smooching, to the AFA, means that Procter & Gamble is promoting the dreaded "homosexual agenda."  Oh heavens to betsy, the gays have infiltrated daytime television now, and are poisoning the minds of housewives and senior citizens while the kiddies (you know, the people they claim to be truly concerned about) are off at school or asleep in their cribs.  Give me a break…no, in fact, give the gays a break!

If these people are so concerned with shielding their children from the world, then I suggest they either hide the remote, get rid of their TVs (or simply don’t get them altogether…but then how would they watch NASCAR?), and don’t have an Internet connection.  That’ll take care of my wish to have these people cut off from poisoning the rest of us with their brand of twisted prejudice, but that’s not likely to happen.

Funnier yet, the AFA has a list of products marketed by Procter & Gamble, basically telling members that this is what they should boycott.  You can find it on this website: http://www.pgboycott.com/productlist.asp. So, I guess if you use any of these products, you’ll either catch herpes or become gay, and if you have any pet food, detergents, or household cleaners, your pets, clothes, and houses will become gay too!

One of the steps of action the AFA recommends is this: "Find P&G products in your home. Each product will have a toll-free number for that product line on the label. Call the number and let them know you oppose their promotion of homosexuality. P&G’s direct line which reaches a live person is 513-983-1100."

Here’s what I recommend to counter this: call the above number and ask if they have received any calls to complain about P&G’s ownership of "As The World Turns" and their "support of the homosexual agenda."  If the person to whom you are speaking says yes, then tell that person that you would like to apologize to him/her and his/her fellow staff members, on behalf of intelligent, level-headed people everywhere, for the behavior of a bunch of bigoted morons.

OK, I’m done being an angry lefty curmudgeon (though the day isn’t over yet).  And no, I’m not too young to be so angry in the case of these people…