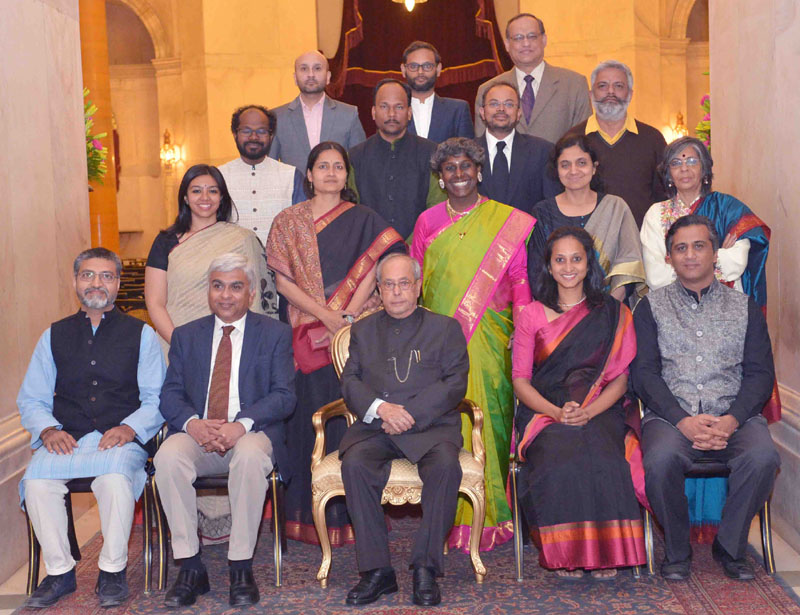 The President, Mr. Pranab Mukherjee with the Ashoka Social Innovators from the Ashoka Innovators for the Public (India), at Rashtrapati Bhavan, in New Delhi on February 11, 2017.

Inspiring Others To Be Change Makers

New Delhi (PIB-GR-TYP-BIN): A group of Social Innovators from the Ashoka Innovators for the Public (ASHOKA) including newly inducted 2016 Ashoka Fellows called on the President of India, Mr. Pranab Mukherjee at Rashtrapati Bhavan on Feb 11.

Speaking on the occasion, the President said that India is a diverse country and this diversity is its strength and needs to be celebrated. He said he was happy to meet Social Innovators from Ashoka working in diverse areas who have the common aim of being agents of change in different societal activities. He said that Ashoka has over the last 35 years of its establishment, mentored and supported over 3000 Ashoka Fellows in 82 countries including over 380 fellows from India.

The President said that it was striking that the Social Innovators not only solved problems through innovative ideas but inspired others to be change makers themselves and create positive social change. He also mentioned that the innovative work of Ashoka Fellow George Abraham, who was present on the occasion, with cricket for the visually-impaired showed how visual disability cannot stand in the way of achieving one’s potential.

Filed under: Civil Rights, News
Share Tweet Pin G Plus Email
previous article: Common Marriage Problems And How To Solve Them
next article: 10 Health Incentives You Can Do At Work