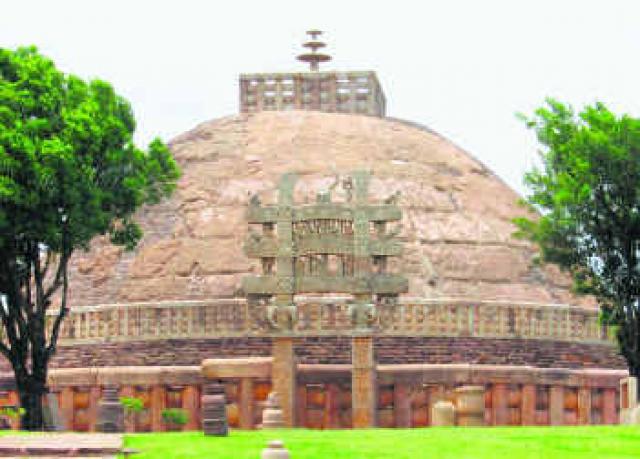 When Buddha died at Kushinagar, his followers fought over his body relics. Each group wanted a share so that they could build stupas in their respective places. They were pacified and the relics were split into eight portions. Subsequently, eight stupas were built over them. A stupa is a hemispherical mound of bricks built over a relic and considered sacred by the Buddhists.

When Ashoka became the Mauryan emperor in the third century B.C, he was keen to spread Buddhism and build many stupas. It is said that the he opened the old stupas and redistributed the relics. Some accounts state that Ashoka built 84,000 stupas while a few others think it is 64,000.

Sanchi is one of the important stupas that Ashoka built. Surprisingly, Buddha never visited Sanchi, but a grand stupa was built to commemorate his life and teachings. It is believed that Ashoka chose Sanchi because his wife Devi was from Vidisha, an ancient city near Sanchi.

Sanchi was an active Buddhist site till 12th century A.D. Many stupas were built around the great stupa or mahastupa including the important one dedicated to Sariputta and Maha-Moggalana, his two principal disciples.

In second century B.C., the Shungas encased the mahastupa with stones. The Satavahanas of the first B.C built the gateways in the four cardinal directions. These gateways are a storehouse of some of the best relief sculptures. They narrate the story of the Buddha’s life, Jataka tales and everyday life in the villages.

Near the southern gateway, the remains of the Ashoka pillar can still be seen. The famous lion capital of this column is now exhibited in the museum near by. The small but exquisite Gupta temple near this pillar, dating to fifth century A.D., is an important example of the earlier structural temple. There are also many monasteries, and votive stupas around the main stupa.

The British archaeologists undertook many excavations in this site. General Cunningham opened the small stupa dedicated to Sariputta and Maha-Moggalana and found two caskets with the letters sa and ma inscribed over them. Inside the casket were the relics. Cunningham shipped them to London but they were later brought back to Sanchi. These relics now remain buried in the Buddhist temple near by. Sanchi was declared as a world heritage site in 1989.

In the second century B.C., Antialkidas, the king of Taxila, sent Heliodorus as a Greek envoy to the court of Kasiputra Bhagabhadra, the king of Besnagar. Heliodorus erected a votive Garuda column dedicated to Vishnu at Besnagar, 15 km from Sanchi. This column contains two inscriptions that are considered valuable for the Indian religious history.