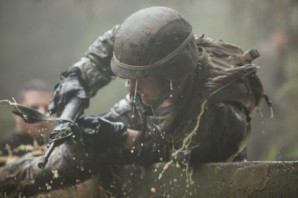 US Marine participates in grueling Jungle Warfare training in 2014.

During a Pentagon news briefing on August 14, 2014 Rear Admiral Kirby stated the following about the pivot of US military  forces to the Asia Pacific region.

“Q: (OFF-MIC) just returned from India and Australia, also Secretary Work will visit the Asia Pacific. Could you comment on the implications of these trips in the effort by the U.S. to rebalance to the Asia Pacific? Also, are these efforts by the DOD to try and draw some attention to the Asia Pacific from Iraq and elsewhere? Thank you.”

“The re-balance is something that Secretary Hagel and Secretary Work are fully committed to. And the trip that we just took, which was the secretary’s sixth trip to the region — he’s going to make four this year — I know it’s the first trip for Deputy Secretary Work, but I think given the fact that there’s a lot going on in the world that we’re still making these visits and still having these discussions speaks volumes about how important we believe the Asia Pacific theater is.

I mean, more than 350,000 American troops are based somewhere in the Pacific, 200 ships, the majority of the Navy is in the Pacific. And we have five of our seven treaty alliances are in the Pacific region. We’re very committed to that region.

To your second question, it doesn’t mean that we take our eye off the ball of the rest of the world. We know we have security commitments around the world in the Middle East, in Africa, in Europe, and we continue to work mightily on those commitments. And there’s been no slackening in that regard.

Now, I will tell you — and I’ll say this unashamedly — that if sequestration remains the law of the land, it’s going to be harder and harder for us to meet those commitments. The defense strategy that we put forward, which allows us to conduct this re-balance and still focus on those parts of the world, will be put in jeopardy.”

For more detailed information on the Pivot to the Asia Pacific see Congressional Research Report: The Obama Administration’s “Re-balancing” toward the Asia http://fas.org/sgp/crs/natsec/R42448.pdf

Filed under: Military, News
Share Tweet Pin G Plus Email
previous article: Are you freaking kidding me? A Hello Kitty Ar-15 assault rifle? Really?
next article: US conducts a total of “25” targeted air strikes in Iraq, according to Rear Admiral Kirby