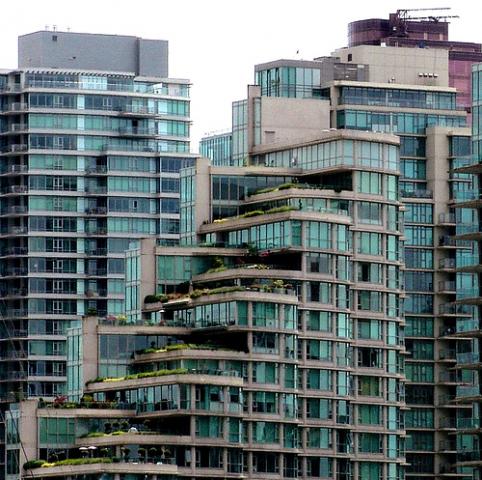 You mentioned in this entry http://www.flickr.com/photos/sillydog/63252751/ that you would be glad to answer questions about growing more plants and veggies in cities.

I have a balcony that is basically storage for my bike at the moment. It’s pretty windswept, and doesn’t get much if any direct sun. I’m not allowed to put up anything that hangs on the railings, but I can put stuff in tubs against the railing. Do you have any suggestions for some very hardy food plants that wouldn’t mind being blown about and otherwise exposed to the elements?

You have two choices when dealing with wind. You can break it up with some sort of windbreak that balances chopping up the wind with flexibility to give (instead of break) in very high winds. Or, you can choose plants that are not as adversely affected.

Plants that have thick cuticles (usually shiny) and thin leaves are adapted to windy areas, such as any number of coastal areas in the temperate world. Mediterranean crops as well as those native to the Black sea and other windswept areas use these mechanisms to turn away from the wind and resist loosing moisture through their stomates and epidermal (outer skin) cells.

Those who live in tropical (USDA zone 10+) area are lucky, because they get to use miniature citrus that are a result of it being such a mutation prone type of crop. They are also already adapted, with thick, shiny leaves.

For those who live in places that freeze, temperate crops need to be kept porch size (and low profile) with winter root protection.  The former can be accomplished by somewhat severe pruning.  To ensure you have fruit, you must choose something that bears on very short multi-year wood (such as spur bearing apples or Japanese plums) or first year wood, as in the case of many berries.

Since you’ll be growing in a pot, you can grow crops that might otherwise be invasive, such as bamboo or Sea Buckthorn.  Sometimes called, seaberry, the latter makes an orange, tart, vitamin-filled juice that is usually mixed with other things, like pomegranate. They can be invasive when the seeds are deposited over coastal areas, so you’ll have to net them if you get birds at your level.  Netting is a good idea to actually keep some of your smaller berries, too.

Some other things that come to mind for the Boston area are jujubes, low-bush blueberries, aronia (wonderful fall colour!), columnar apples (close to the building) and lower-growing shubberies such as gooseberry, currant, strawberries and raspberries.

In fact, if you could manage the plants in large enough pots, there are several perennials that would do well. You may need to weigh the pots down with rocks on top, or tie them to a railing (I’d poke a hole in the pot with an awl) with stiff wire or twine.

Trees and shrubs that are too vigorous will need to be pruned back too often in such a small space to generate fruiting wood. Even crops such as grapes that do fruit on "first-year wood" may be too spreading to control.

If you want to grow annuals, be advised that their leaves are far more tender and, for the most part, won’t stand up to drying winds with low humidity. If it is very humid in your area, this will be made easier. If you’re on the 3rd story as opposed to the 43rd story, the winds won’t be nearly such a problem and you can pretty much grow whatever will tolerate those light conditions, which again, is not much. Vegetables prefer full sun, almost without fail.

As far as the annual crops go, there are several that may resist wind when there is plenty of sun present.  Tomatoes are quite resiliant, with those leaf hairs that protect the surface from actual contact with the wind (forming a humid boundry layer). Peppers are also waxy sometimes.

Of course, the suitability of your balcony to supporting annual crops is greatly dependent upon your solar orientation. If the balcony faces north, your options might be limited to root vegetables in a bucket or even growing mushrooms on logs.  South is, of course, the best for annual growth.

Most crops require at least 4 hours per day, but bear in mind that four hours of sunlight may only mean one or two, depending upon your angle.  East and west can be useful for crops, especially the latter, when used with crops that you set out late.  If the soil isn’t warm, germination may be terminally delayed — it is often better to just wait until the sun comes around.

To keep these well and actually get fruit (and keep them matched to the size of their pot), you will need to pay very careful attention to pruning. Imagine the root-ball being roughly equal in area to the crown. Roots can snuggle in closer than shoots. You won’t exactly be pruning them down as bonsai, but they will be forcibly pruned into a smaller shape that allows plenty of air movement and light penetration.

They simply need to be either taken in for the winter and put in a cool room (40-50F / 4-10C). If this isn’t possible, you’ll need to give the roots winter protection. If they were in the ground they wouldn’t be nearly as prone to damage from frost heaving as they are in pots. The same is true of small ponds.

You could do that with bales of straw all around. You can put a tarp over them to Even better if you had an animal on the inside that could make use of the straw, such as a bantam chicken or a rabbit or some such.

The litter could then be composted in a small bin on the other side of the balcony porch. One of those flippy ones would be ideal, since there’s not much room for spading out there.

Anyhow, I hope that answers your question. Don’t transplant anything except bulbs after Sept 30 and monitor your water as an art and a science. It’s easy to keep one long flower box full of plenty of lettuce for one with a greenhouse sort of covering.

Of course, you can always grow indoors under lamps.  As long as it’s not weed, you have nothing to fear from heat sensing heliocopters.

Send any questions you might have to "Ask an Urban Farmer"